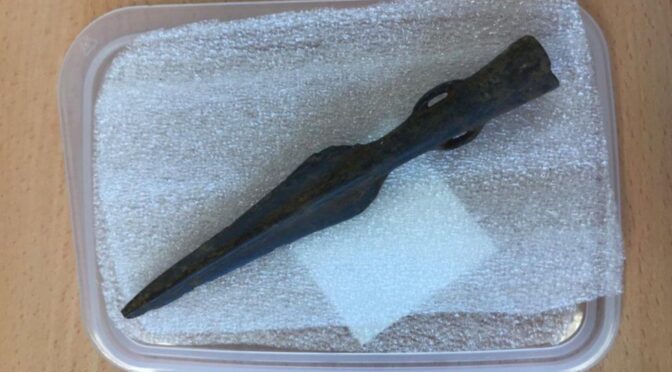 A rare Bronze Age spearhead has been found by workers while developing a wetland in Gloucestershire. Experts discovered it at Cirencester Sewage Works, near South Cerney, earlier this year and on 10 May estimated it is about 3,500 years old.

Archaeologists said it appeared to be a family heirloom that was placed into a pit for a reason unknown.

Other items unearthed include a selection of prehistoric pottery fragments and flint tools.

The spearhead was found on 22 March at the site owned by Thames Water, which is being turned into a wetlands area to improve biodiversity.

Cotswold Archaeology project manager Alex Thomson said: “Items like this are quite rare and during the Bronze Age they would have been equally as rare and quite special.

“It’s always exciting as you never know what you’re going to find, it could be absolutely nothing or, as in this instance, you could find more than you bargained for.”

Mr Thomson said he thought the spearhead was likely associated with a “wider settlement” found nearby during excavations undertaken in the late 1990s.

Thames Water archaeologist Victoria Reeve added: “We knew we were likely to come across something interesting while carrying out the work, which is why we had Cotswold Archaeology on site ready to record any archaeology that was present, but we were blown away by what we actually discovered.

“It was one of the first things that came out and normally if we had started excavating, we might have expected something to turn up more mid-way through.

“There’s been a lot of work in this wider area, so if you bring all of those sources together, then you can start to plot where you think people might have been in the past.”

The items will be taken back to a laboratory for analysis and then handed to the Corinium Museum in Cirencester.