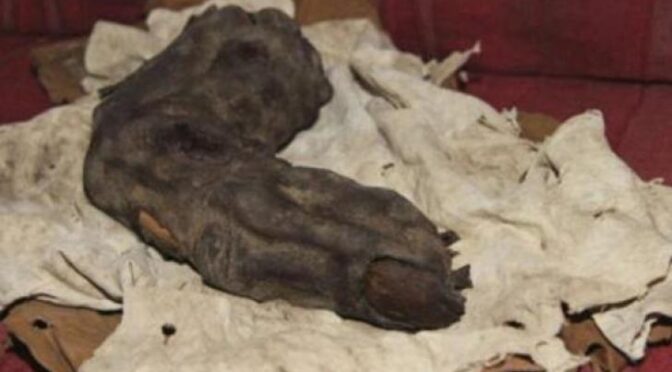 Researchers are traveling with photographs of a massive finger which are said to be 38 centimeters long, as they believe it is impossible and can not exist.

Although science suggests it’s impossible the finger found in Egypt is said to be true, and it has been X-rayed and comes with a certificate of authenticity.

The photographs of the large finger were captured in 1988, and at the time they were published in one of the leading newspapers in Europe.

The finger seems to suggest that it is evidence of giants having walked on the Earth in the past. The Bible even refers to Nephilim.

The remains of the finger are quite impressive, and the finger is a mummified humanoid finger that is 38 centimeters.

Egyptian researchers have said that the finger must have belonged to a creature that was more than 5 meters tall and in 1988 only a very few people were allowed to take photographs of what has been called an artifact that is incredible.

A grave robber was said to have discovered the huge finger when he was searching a tomb in Egypt that has not been disclosed. Entrepreneur Gregor Sporri wanted to buy the finger from the owner and made a good offer, but the owner said that he would not sell it.

Sporri said that the grave robber has a certificate to say that the finger was authentic and he also had an X-ray of the finger.

Sporri said that the finger was in a package that was oblong and it had a very musty smell to it. When he told the story about the finger in 2012, he said that he been very surprised when he had been shown the dark brown, huge finger.

He went on to say that he had been allowed to pick it up and that he was also allowed to take photographs of the giant finger.

Sporri said that a bill had been placed at the side of the finger so that comparison in size could be got and the finger was bent and split open, and it had been covered in mold that had dried.

Once Sporri left Egypt he decided that he would like to find out more about the giant finger and he set about trying to find where the body belonging to the finger was located.

He made his way back to Egypt in 2009 and went looking for the man who owned the finger, but he could not find him and it left scientists along with researchers scratching their heads.

All that remains of the giant finger are photographs that were taken of the finger along with stories of the huge creature that walked among humans, which the finger must have belonged to. Scientists and researchers have many mixed feelings about the relic.

One of the issues they have with the finger is that it does not fit in with conventional theories that have come from historians and archaeologists.

In fact, many have said that the finger could not possibly exist. But is the photographs proof that giant creatures did walk on planet Earth in Egypt or was the finger no more than a hoax?