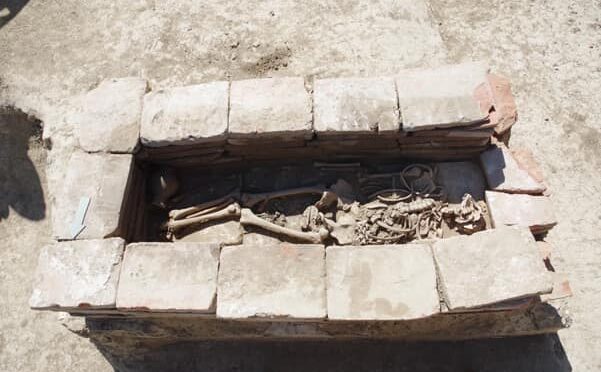 ZAGREB, CROATIA—Archaeology Org reports that the remains of an Avar warrior dating to the late seventh or early eighth century A.D.

Archaeologists have been found in a tomb in eastern Croatia, near the site of the Roman city of Cibalae. The Avars were Eurasian nomads who arrived in Europe in the sixth century A.D.

During archaeological studies at the city cemetery of Vinkovci, which had started before the coronavirus pandemic and resumed these days, and investigating Avar graves, discovered by workers who had been expanding burial plots.

The City museum archeologists have discovered remains of an Avar warrior and a set belt that can be dated to the turn of the 7th to the 8th century, which is, according to Vinkovci city museum archaeologist Anita Rapan-Papesa, a very valuable find.

“When we observe the walled grave we have discovered, it turns out that Avars saw how Romans were buried so they made their own copies of Roman graves,” the archaeologist specializing in the Middle Ages said.

In addition to the walled grave, the archaeologists explored an ordinary earthen grave, where they found a warrior and his horse, with unique bridle ornaments.

Rapan-Papeša underscored that the border of the protected archaeological site in Vinkovci went through the middle of the field where the Avar graves had been unearthed and that they were the westernmost graves in the area of the former Roman city of Cibalae.

There are five more Avar graves to be explored, and as the work on expanding burial plots in the city cemetery in Vinkovci continues, further archaeological research will continue, as well.