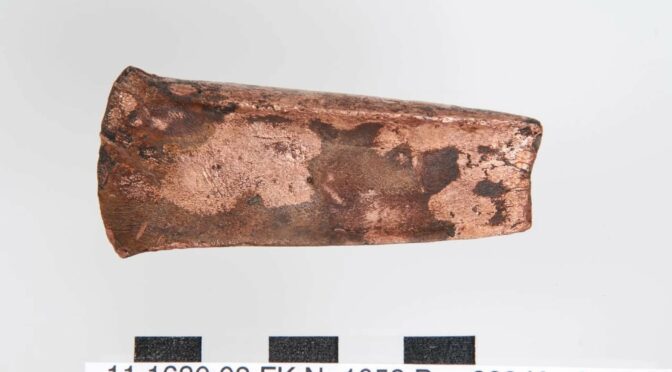 Archaeologists discovered a copper blade in Switzerland that’s just like the ax Ötzi the famous “Iceman” was carrying when he died. Like Ötzi’s ax, this tool was made with copper that came from 100’s of miles away, in present-day Tuscany in central Italy.

The discovery could shed light on Copper Age connections across Europe. Bad fortune eventually made Ötzi the Iceman more famous. About 5,300 years back, he was shot with an arrow, struck in the head and left to die near a mountain pass high in the Alps.

Until 1991, when hikers near the Italian-Austrian border discovered his body, he was buried in a glacier. Ötzi is Europe’s oldest mummy, and scientists studied almost every aspect of his life and death, from his tattoos and tools to his diet and DNA.

Among the equipment Ötzi carried was an ax of almost pure copper, remarkable because its wooden handle and leather straps were still preserved. This past summer, researchers traced the source of the metal in Ötzi’s ax to southern Tuscany, which came as a surprise to them.

The huge mountains of the Alps were thought to be a “neat cultural barrier” separating the metal trade, the authors of that study wrote in the journal PLOS One; people living around the Alps at that time were believed to have gotten their copperlocally or from the Balkans.

Now, archeologists in Switzerland report finding another blade on the northern foot of the Alps with the same make as Ötzi’s.

The ax was discovered in Zug-Riedmatt, one of the many pile-dwelling villages around the Alps that are famous for their prehistoric wooden houses built on stilts on lake shores and other wetlands.”

It was a very efficient general-purpose ax, especially proper for woodworking,” said Gishan Schaeren, an archaeologist with the Office for Monuments and Archaeology in the Swiss canton (or state) of Zug. But in addition to chopping trees to build stilted houses, people could use this axs as lethal weapons, Schaeren added.

The newfound blade was between 5,300 and 5,100 years old and missing its wooden handle. It was about half the weight of Ötzi’s blade and shorter, but the same shape. By measuring the traces of lead in the blade, Schaeren and his colleagues could link the copper to the same source in southern Tuscany.”

Schaeren thinks that Copper Age people should be given more credit.” We have to consider that people who traveled in the Alps had a very profound knowledge of the landscape and its conditions due to their experience with hunting, herding and exploring natural resources in these areas,” he said.

Stronger links to southern Europe, Schaeren added, could explain certain styles of rock art, pottery, burial customs and other phenomena seen in the north.”It is one step to a much more connected worldview,” Schaeren said.