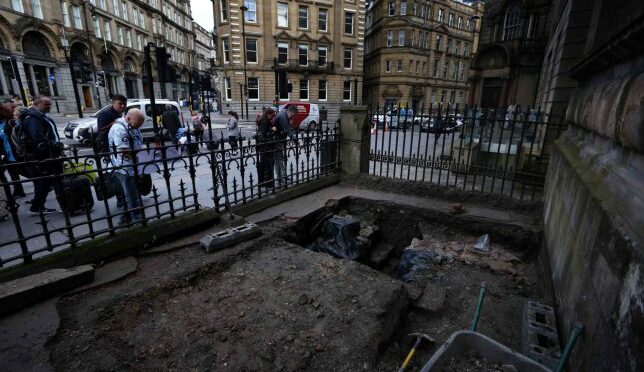 During site investigations, Hadrians ‘ Wall was uncovered as part of a scheme to revive a historic building in downtown Newcastle.

The section of the wall has been revealed outside the Mining Institute on Westgate Road. It was reportedly last seen during an excavation on the site in 1952.

But Simon Brooks, acting general manager of the Mining Institute, said: “There was some controversy about whether the Wall had been found. A lot of people were sceptical but now we have proof positive and we are delighted.”Site investigations are being carried out by Newcastle-based The Archaeological Practice.

Archaeologist Alan Rushworth said: “Various people had cast doubts about what had been found in 1952 but this now adds a lot more precision about the course of the wall.”

Nick Hodgson, the author of the new book, Hadrian’s Wall on Tyneside, said: “It is wonderful to see the wall again in the center of Newcastle.”

The wall has also been previously located under the Coopers Mart building at the bottom of Westgate Road, now occupied by Ryder Architecture.

The remains of a milecastle – a small Roman fort – have also been found near Newcastle Arts Centre on Westgate Road. The investigations have also uncovered the 6ft wide foundations of Westmoreland House, which was demolished to make way for the Mining Institute building in Neville Hall, which opened in 1872.

The origins of the house, which was the property of the powerful Neville family, date from the 14th century and what has been revealed is probably the base of a wing from the 17th century.

A dig inside the institute has revealed a cellar of Westmoreland House, which had been filled in with slag to level the ground after the demolition of the building probably from industrial works in what is now known as the Stephenson Quarter.

Mixed with slag is waste such as animal bones, oyster shells and clay pipes.“It looks like they are using whatever they could get their hands on to fill in the cellars,” said Alan.

Last year, the North of England Institute of Mining and Mechanical Engineers won a £600,000 development grant from the Heritage Lottery Fund to pave the way for a bid next year for more than £4m for a project which involves:

1. The restoration of the exterior of the institute’s grade II-star listed Neville Hall along with the renovation of interior rooms, including the sumptuous Nicholas Wood Memorial Hall and the Edwardian lecture theatre

2. The preservation and celebration of the institute’s industrial and engineering heritage and the genius of the early pioneers and entrepreneurs whose skill, knowledge and invention were exported around the world

3. Digitization of its unique archive, creating online access for research into one of the most important collections in the world for the study of the Industrial Revolution

4. Exploration and development of a programme aimed at ensuring that the institute and its heritage are better understood by the communities of the North, as well as the promotion of engineering careers and apprenticeships

5. Securing a future role for the institute through a proposed Common Room of the Great North to provide meeting spaces for the region and promoting – in the building and online – a programme of debates, conferences, seminars and events that contribute to the economic, social, environmental and cultural life of the North East.