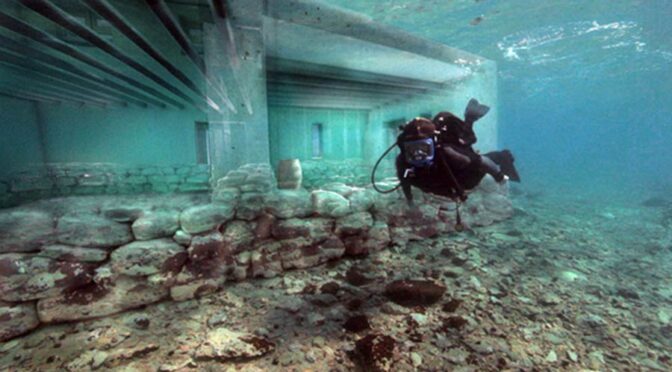 Archaeologists surveying the world’s oldest submerged town have found ceramics dating back to the Final Neolithic. Their discovery suggests that Pavlopetri, off the southern Laconia coast of Greece, was occupied some 5,000 years ago — at least 1,200 years earlier than originally thought.

These remarkable findings have been made public by the Greek government after the start of a five-year collaborative project involving the Ephorate of Underwater Antiquities of the Hellenic Ministry of Culture and The University of Nottingham.

As a Mycenaean town, the site offers potential new insights into the workings of Mycenaean society. Pavlopetri has added importance as it was a maritime settlement from which the inhabitants coordinated local and long-distance trade.

The Pavlopetri Underwater Archaeology Project aims to establish exactly when the site was occupied, what it was used for and through a systematic study of the geomorphology of the area, how the town became submerged.

This summer the team carried out a detailed digital underwater survey and study of the structural remains, which until this year were thought to belong to the Mycenaean period — around 1600 to 1000 BC.

The survey surpassed all their expectations. Their investigations revealed another 150 square metres of new buildings as well as ceramics that suggest the site was occupied throughout the Bronze Age — from at least 2800 BC to 1100 BC.

The work is being carried out by a multidisciplinary team led by Mr Elias Spondylis, Ephorate of Underwater Antiquities of the Hellenic Ministry of Culture in Greece and Dr Jon Henderson, an underwater archaeologist from the Department of Archaeology at The University of Nottingham.

Dr Jon Henderson said: “This site is unique in that we have almost the complete town plan, the main streets and domestic buildings, courtyards, rock-cut tombs and what appear to be religious buildings, clearly visible on the seabed. Equally, as a harbour settlement, the study of the archaeological material we have recovered will be extremely important in terms of revealing how maritime trade was conducted and managed in the Bronze Age.”

Possibly one of the most important discoveries has been the identification of what could be a megaron — a large rectangular great hall — from the Early Bronze Age period. They have also found over 150 metres of new buildings including what could be the first example of a pillar crypt ever discovered on the Greek mainland. Two new stone-built cist graves were also discovered alongside what appears to be a Middle Bronze Age pithos burial.

Mr Spondylis said: “It is a rare find and it is significant because as a submerged site it was never re-occupied and therefore represents a frozen moment of the past.”

The Archaeological coordinator Dr Chrysanthi Gallou a postdoctoral research fellow at The University of Nottingham is an expert in Aegean Prehistory and the archaeology of Laconia.

Dr Gallou said: “The new ceramic finds form a complete and exceptional corpus of pottery covering all sub-phases from the Final Neolithic period (mid 4th millennium BC) to the end of the Late Bronze Age (1100 BC).

In addition, the interest from the local community in Laconia has been fantastic.

The investigation at Pavlopetri offers a great opportunity for them to be actively involved in the preservation and management of the site, and subsequently for the cultural and touristic development of the wider region.”

The team was joined by Dr Nicholas Flemming, a marine geo-archaeologist from the Institute of Oceanography at the University of Southampton, who discovered the site in 1967 and returned the following year with a team from Cambridge University to carry out the first-ever survey of the submerged town.

Using just snorkels and tape measures they produced a detailed plan of the prehistoric town which consisted of at least 15 separate buildings, courtyards, streets, two-chamber tombs and at least 37 cist graves.

Despite the potential international importance of Pavlopetri, no further work was carried out at the site until this year.

Through a British School of Archaeology in Athens permit, The Pavlopetri Underwater Archaeology Project began its five-year study of the site with the aim of defining the history and development of Pavlopetri.