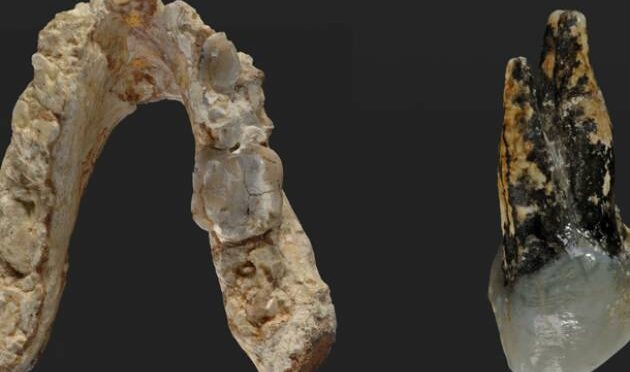 The human lineage separated from that of apes about 7 million years ago in Africa, according to the widely agreed narrative of human evolution. Hominins (early humans) are thought to have lived in Africa until they first spread to Asia and then to Europe around 2 million years ago.

Today, the narrative is being updated by a team of scientists from the University of Tubingen in Germany and the University of Toronto in Canada. They claim that the oldest human ancestor originated in Europe, not Africa, about 7.2 million years ago, about 200,000 years older than previously believed, in two parallel research published in the journal PLOS One.

The researchers base their bold hypothesis largely on the analysis of two fossils: a mandible (lower jaw) found in Greece in 1944 and an upper premolar tooth found in Bulgaria in 2009.

The fossils belonged to an ape-like creature known as Graecopithecus freybergi (“El Graeco,” for short), which roamed the Mediterranean region between 7.18 and 7.25 million years ago.

Though the fossilized jawbone from Greece has been around a while, most scientists had dismissed it as a source of good information due to its poor condition. “It’s not the best specimen in the world,” David Begun of the University of Toronto, who co-authored the new research, told HISTORY.

“It has a lot of damage to the surface of the jawbone itself and a lot of damage to the teeth, so they’re really hard to see, they’re difficult to measure, and it’s hard to say what they look like.” But when Begun’s colleague, Madelaine Böhme, had the idea of using computer tomography, or CT-scanning, to look inside the mandible, things got more interesting.

“We saw that the roots of the teeth embedded in the mandible were perfectly preserved…and they gave us a lot of new information that we never had about this specimen,” Begun said. “The canine root is quite short and slender and indicates that the canine was small. That’s really important, because in apes—and male apes in particular—the canine is quite large.” This holds true for most male primates, Begun explained, but not all. “This root shows that the canine was already reduced, which is a characteristic that you only see in humans and our fossil relatives.”

In addition, analysis of the two fossils showed that some of the roots of the bicuspid teeth of Graecopithecus—what we call the premolars—had simplified, or fused to form fewer roots. “That is again something that you only see in humans and our fossil relatives. It is extremely rare to find it in living apes, and you don’t see it in any fossil apes from the same time period,” Begun noted.

In the second, complementary study based on sediment in Greece and Bulgaria from that time, Begun and his colleagues found that the climate during the period El Graeco lived there would have been similar to the dry savannahs known to have encouraged the shift to bipedalism that marked early hominin evolution. In fact, it would have been highly similar to the climate of eastern Africa.

If Graecopithecus is in fact a hominin, it would slightly predate the earliest known human ancestor found in Africa, Sahelanthropus tchadensis. Discovered at a site in Chad, Sahelanthropus is believed to be between 6 and 7 million years old.

Begun emphasized that the new hypothesis doesn’t affect the later story of modern humans and their emergence from Africa. “That story is completely intact,” he told HISTORY. “This is about what happened millions and millions of years before that when the human lineage in its entirety arose.”

Some other experts in human evolution are skeptical of Graecopithecus’ newly anointed status as the earliest known hominin. In particular, they question the claim that the jawbone and tooth shape alone establish its pre-human status.

“We just don’t have enough evidence to come to that conclusion,” Bernard Wood of George Washington University, who was not involved with the new study, told HISTORY. “It’s perfectly possible that one or more fossil apes have roots like that.”

As he pointed out, it’s not uncommon for primates to evolve the same morphological traits or features independently from each other. “If you asked me, how much would I be prepared to bet that this is a hominin,” Wood continued, “you’d have to persuade me to put more than a quarter on [it].”

Begun acknowledges the possibility that El Graeco’s tooth shape and size may have occurred independently from early humans and admitted he would like to have more and better-preserved fossil evidence supporting the new hypothesis. Still, he stands behind his and his colleague’s conclusions about Graecopithecus, based on the fossil evidence they do have—and he believes there is likely more out there.

“I think there’s a pretty good chance that we’ll find new sites in the next few years. We might get lucky, and find some more, better-preserved teeth, and especially limb bones, that could help to answer this question more definitively.”