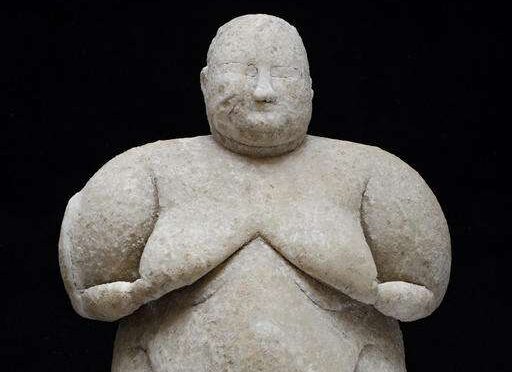 An 8,000-year-old statuette of what could be a fertility goddess has been unearthed at a Neolithic site in Turkey, according to archaeologists.

The figurine, discovered at Çatalhöyük in central Turkey, was wrought from recrystallized limestone between 6300 and 6000 B.C. That material is rare for an area where most previously discovered pieces were sculpted from clay, the researchers said.

The archaeologists think this figurine, which is conventionally associated with fertility goddesses, is also representative of an elderly woman who had risen to prominence in Çatalhöyük’s famously egalitarian society.

Goddess figurines were common in the Neolithic period, with those found at Çatalhöyük usually depicting a plump woman with her hair tied in a bun, sagging breasts and a pronounced belly, they said.

The newfound figurine differentiates itself from similar statuettes not only in its material and quality but also in its craftsmanship, according to Ian Hodder, a professor of anthropology at Stanford University who is overseeing the Çatalhöyük site. Hodder said that he “realized immediately that it was a very special find.”

At 6.7 inches tall (17 centimetres) and 4.3 inches (11 cm) wide, the figurine has fine details such as elaborate fat rolls on the limbs and neck.

Unlike other goddess statuettes, the limestone figurine also depicts the woman with her arms separated from her torso and an undercut below the belly to separate it from the rest of the body.

These finer details would have only been possible with thin tools, like flint or obsidian, the researchers said, which suggests that the carving could only have been made by a practised artisan.

With its fine artistry and its discovery in the newer, shallower parts of the site (meaning that it was likely buried later), Hodder said that the figurine might signal a shift from a sharing economy to an exchange economy, where resources could be accumulated unevenly.

“We think society was changing at this time, becoming relatively less egalitarian, with houses being more independent and more based on agricultural production,” Hodder said in a statement.

The archaeologists think that the figurine was made after Neolithic Çatalhöyük, where resources were often pooled, changed toward a more stratified society.

The fatness of the goddess statue could represent high status rather than an elevated place in a society of equals, Hodder said.

Whatever the shift, it did not happen overnight. Humans first settled in Çatalhöyük around 7500 B.C., with the society reaching its peak around 7000 B.C., according to archaeologists. The ancient settlement was abandoned around 5700 BC.