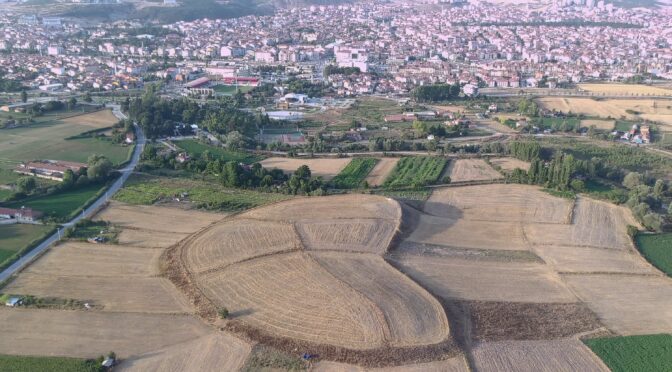 8,000 years of history to resurface at Turkey’s Tavşanlı Mound

Excavations set to start at a mound in the central Turkish province of Kütahya in September are expected to shed light on 8,000 years of history, archaeologists said.

Dubbed the “Heart of Kütahya” over its shape detected through aerial footage, the “Tavşanlı Mound” located in the namesake district will be unearthed through the cooperation of the Ministry of Culture and Tourism and Bilecik Şeyh Edebali University (BŞEU), along with the support of the Tavşanlı Municipality.

Academics from Ankara University, Ankara Hacı Bayram Veli University, Hacettepe University, Istanbul University, Zonguldak Bülent Ecevit University and Uşak University will also take part in the excavations, to be headed by Erkan Fidan, a faculty member at the archaeology department of the BŞEU.

The excavations were launched through a presidential decree and are expected to last some 30 years.

Sezer Seçer Fidan, a Hittitologist who is also in charge of the Tavşanlı Mound site, told Anadolu Agency (AA) that the mound was once one of the largest settlements in western Anatolia.

“While previous settlements here were a conglomeration of a couple of villages, as the swamps were filled and drained, it becomes a site that could serve as the basis for urbanization and turn into a capital city.

This corresponds roughly to (a period) four to 5,000 years earlier. Urbanization at this site of course does not consist of a single-phase, but a formation that continues to expand over time,” Fidan said.

She explained that the goal for excavations during this year is to uncover city walls dating back to the Hittites and modern ages, which would prove the importance and scale of the Tavşanlı Mound.

Fidan noted that the mound might contain information, documents and findings on those who have lived in western Anatolia for the last 8,000 years.

“The settlement here lasted until the end of the Bronze Age; therefore, we can see a number of ages stratigraphically. Here, we both want to monitor transitions between civilizations and the exact importance of such a large mound spanning a hectare (in size). … If we can detect buildings related to the Hittite period, then we can find written documents or findings.

It would be a very important finding for western Anatolia since written documents are very rare in this region,” she noted.