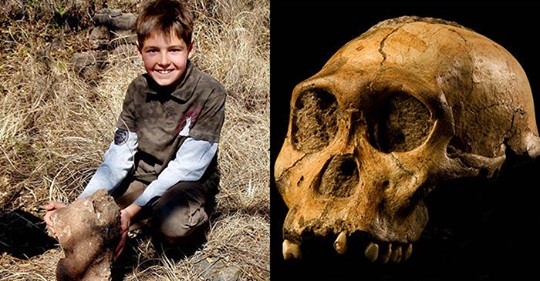 In South Africa, a young boy walking his dog has unconsciously stumbled through a pair of about 2 million years old which is now supposed to fill an integral gap in our knowledge of human evolution.

Nine-years-old Matthew Berger and his dog stumbled in a cavern close Johannesburg in 2008, in Malapa, South Africa, over the partially fossilized bones of an adult woman and a young man.

Since then, there has been much debate over whether these remains are genuinely distinct from previously discovered species.

The bones were found to be a close relative of the Homo genus and have come to be known as Australopithecus sediba (Au. Sediba) — “Australopithecus” means “southern ape.” And now, according to a new study, the remains are believed to be the bridge in human evolution between early humans and our more apelike ancestors.

And these latest Au. Sediba skeletons are even more complete than the famous “Lucy,” whose 1974 discovery was previously unprecedented.

“The anatomies we are seeing in Australopithecus sediba are forcing us to reassess the pathway by which we became human,” reported Jeremy DeSilva, co-author of the study.

Though some researchers have noted this discovery as indeed that of a unique species since its uncovering in 2008, this latest study illustrates precisely how Au. sediba is, in fact, distinct.

The study thoroughly describes the new species’ anatomy and has found similarities with early members of the Homo genus “suggesting a close evolutionary relationship.”

The hands of the nearly 2-million-year-old Au. sediba resemble those of Homo habilis but are not the same, which suggests that the former was also able to use tools or at the very least, had a more precise grip than that of earlier species.

Australopithecus sediba is also now believed to have walked on two feet, though it would have spent much of its time in the trees, “perhaps for foraging and protection from predators,” the study said.

And all this, remember, came from an accidental discovery.

“Imagine for a moment that Matthew stumbled over the rock and continued following his dog without noticing the fossil,” the authors wrote.

“If those events had occurred instead, our science would not know about Au. sediba, but those fossils would still be there, still encased in calcified clastic sediments, still waiting to be discovered.”