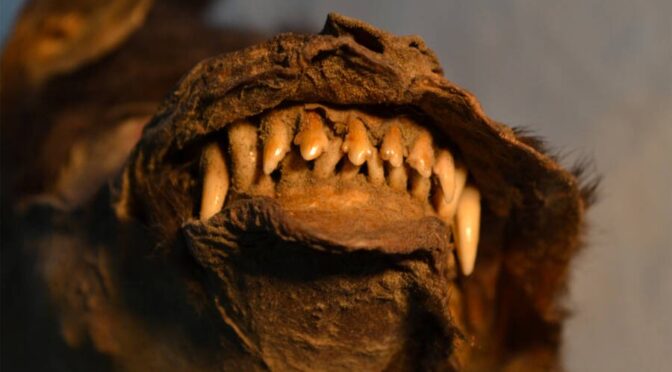 A 14,000-year-old puppy, whose perfectly preserved body was found in Russia, munched on a woolly rhino for its last meal

Russian scientists in 2011 found a perfectly preserved Frozen Aged puppy in Siberia. Recently, while examining the 14,000-year-old wolf-dog’s stomach contents, researchers were stunned to find evidence of what could be one of the last woolly rhinos on Earth still in its prehistoric bowels.

“It’s completely unheard of,” professor of evolutionary genetics Love Dalen said. “I’m not aware of any frozen Ice Age carnivore where they have found pieces of tissue inside.”

Scientists originally found the furry canine at a dig site in Tumat, Siberia, and shortly afterward found a piece of yellow-haired tissue inside its stomach.

Experts initially believed that the tissue belonged to a cave lion, but after sharing the evidence with a resourceful team in Sweden, learned otherwise.

“We have a reference database and mitochondrial DNA from all mammals, so we checked the sequence data against that and the results that came back — it was an almost perfect match for woolly rhinoceros,” Dalen explained.

Dalen works at the Centre for Paleogenetics, which is a joint venture between Stockholm University and the Swedish Museum of Natural History, so his team had access to both highly-detailed DNA databases and radiocarbon dating.

After Dalen and his colleagues were able to assess with the overwhelming likelihood that this half-digested tissue belonged to a woolly rhinoceros, they then radiocarbon dated it at around 14,400 years old.

Modern research has shown that the woolly mammoth’s extinction was partly due to severe climate change. As for how this lucky puppy got its paws on such a specimen, which is the same size as a modern-day white rhino that weighs nearly 8,000 pounds and stands six feet tall, remains largely unclear.

Indeed, Edana Lord, a Ph.D. student who co-authored a research paper studying the woolly rhino’s road to extinction, asserted that due to the rhino’s size it is impossible that the puppy killed the animal itself.

Additionally, experts were surprised to see that the rhino was left mostly undigested in the puppy’s stomach, leading Dalen to conclude that “this puppy must have died very shortly after eating the rhino.”

“We don’t know if it was a wolf, but if it was a wolf cub, maybe it came across a baby rhino that was dead,” Dalen hypothesized. “Or the (adult) wolf ate the baby rhino. Maybe as they were eating it, the mother rhino had her revenge.”

This wolf-pup is just one of a few amazing prehistoric canines specimens to be found in the last decade. In 2016, a miner in the Yukon region of Canada found a mummified 50,000-year-old wolf pup alongside a prehistoric caribou.

Then, in 2019, researchers found an 18,000-year-old wolf-dog hybrid perfectly preserved in the Siberian permafrost. They have since named that specimen “Dogor.”

Ultimately, researchers hope that this latest find can shed some more light on the last days of the woolly rhino — which are still being debated millennia later.