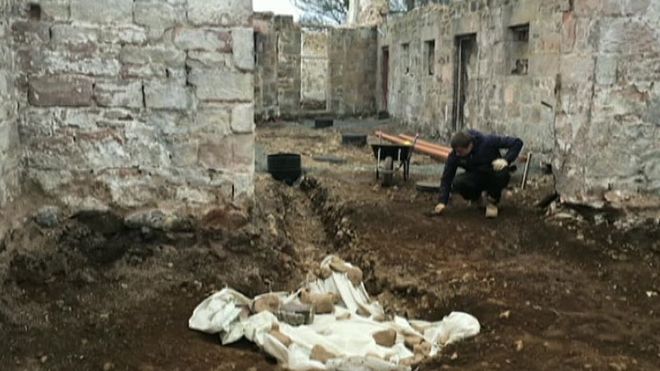 Builders working on a hotel in rural Northumberland have discovered human remains thought to be about 4,000 years old.

The Tankerville Arms in Wooler was undergoing renovation work when they unearthed a Bronze Age stone burial chamber – or cist.

A digger driver was laying drainage pipes when he struck the stone made coffin before moving the cover slab back to see the hollow inside.

Inside were human remains in a crouched burial position with a small, ‘beautifully fashioned flint knife’ found by the legs of the skeleton.

Archaeologists are examining it to find out the sex of the single skeleton and whether other remains lie around the site.

The team, from Northumberland County Council’s current estimates, suggest the cist dates from some time between 2,200BC and 1,750BC.

Local archaeologist Roger Miket said the cist is formed of four upright stones with the cover slab on top.’

‘It may have been a woman because they were buried on their right side with their head to the west, although we can’t be certain until further analysis is done.

‘It also seems to have been charred so that is an interesting insight into the burial process, he said.

‘Of course, we have no idea of their religious beliefs but we have the symbols which give us some idea of what they thought so we know they believed in the afterlife.

He said that the knife would have been a precious item at the time of the burial and was included in the grave for use in the afterlife.

‘We’re having six self-contained holiday cottages built and the builders were just laying the last drain and came across a very flat, large stone and it became apparent it shouldn’t have been there.’

Northumbria has numerous archaeologically important sites from prehistoric cup and ring motifs, henges and hillforts including Ad Gedfrin, the palace of the ancient kings.