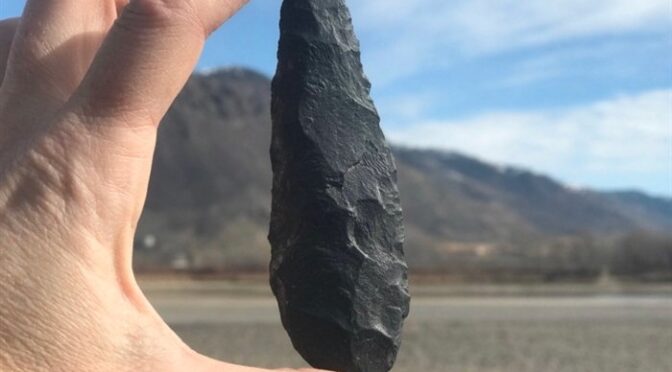 A Canadian archaeologist walking her dog finds a 9,000-year-old artifact on Thompson River

An archaeologist from Kamloops came through a piece of history dating from 9,000 to 6,000 years while she was out with her dog for a walk.

Heritage director Joanne Hammond, and assistant CEO of Skeetchestn Natural Resources Corp., spotted the spearhead this weekend as she walked along the Thompson River.

“Wherever it’s not developed & there’s a pretty good chance you’re going to find something,” Hammond says.

She says the term ‘site’ can mean anything from a single artifact to an entire village.

Currently, Hammond is in a Process of registering it as an archeological site near the northern shore of Kamloops, which would grant it recognition and protection by the government. The Department of Forestry and Agriculture, Natural Resources Activities, Rural Development shall send photos, planning sites and a Report to the Ministry of Archaeology.

She considered a spearhead in the Kamloops region among the oldest. She says previous studies and radiocarbon dating have helped research teams to consider how long the points were used, and says even the shape hints to when and how it was used.

“That’s a really distinctive style. In general, the bigger and more robust points tend to be older,” Hammond says. “The most recent style of a point is specific to Kamloops is called the Kamloops points and it’s this very small triangle points with notches at the sides, they’re very distinctive.”

She says the older, rounder spearhead was used before atlatls were invented to throw spears further and faster. That means the hunter who used this spearhead would have most likely worked with others to take down large game such as elk, deer, and sheep.

“It would’ve been a pretty risky thing to do by yourself, so most of the hunting was done communally,” she says.

Hammond says nearly every year, she finds one or two artifacts while out and about. With 265 designated sites within 10 kilometers of the downtown area, Kamloops is second only to Victoria for the number of sites within close proximity to the city.

“(Kamloops) was always a pretty important hub. It was a pretty dense residential area in pre-contact times, and a trading hub and a travel corridor, so it does have a higher number of archeological sites than other areas,” Hammond says. “It’s a good example of when things like this come up to be reminded of the depth and intensity of the cultures that were here before them.”

“Just because we pave over it, doesn’t mean it disappears,” she says.

There are 165 sites within city limits, 200 sites on the Tk’emlups te Secwepemc land, and 175 sites located in what is known as the Secwepemc Cradle between Kamloops and Chase.

Registering the sites can help officials to monitor historical areas, but any artifacts found – even if not on a designated site – are still protected by law, according to Hammond. She recommends reporting a found artifact the Secwepemc Museum.

“There are a lot of circumstances where people are concerned that someone else is going to nick it if they do leave it there, and that is legitimate… we recommend that people leave it. You can hide it under something, pretty much a few leaves are going to do the trick.”

Hammond says removing an artifact such as a spearhead can disrupt archeological research in the area.

“The majority of the value of the artifact is in its context, its location and the things it’s associated with,” Hammond says. “As soon as you remove it, that context is lost and so most of the information we can learn from a site is lost, and all you have left is a collectible… So we really, strongly encourage people to leave it there.”