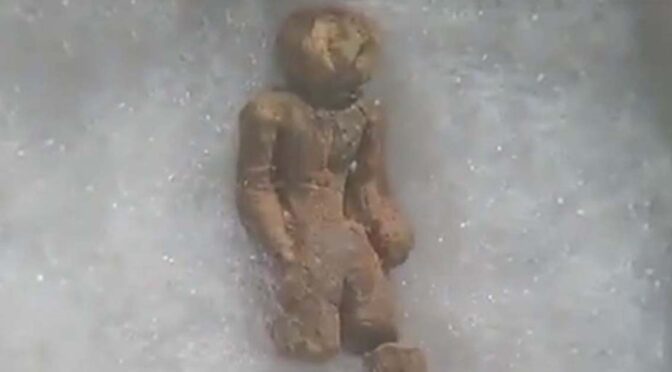 The Nampa Figurine: 2-million-year-old Relic or Just a Hoax?

Nampa Statue or Nampa Figure is the figure discovered in Idaho in 1889 on the ground layers, that is believed two million years old.

This statue has given rise to theories on the origins of mankind. Some people say it’s just fake but this high class small human figure is a very interesting thing, which might have also the more natural explanation.

The theory of the two million years old human civilization may, of course, be possible, and here we must say that one statue would not make civilization.

The figure is found 300 feet deep, and it is 91 meters in the metric system. So the person or persons who dig that statue in the ground must spend very much time on that operation.

There is one special detail of that figure, and it seems to wear European clothes. Also, the figure seems hanged, but this might be only the imagination. There is claimed to have evil forces in this figure, what is the really mysterious artifact.

But there is one very interesting explanation for this creature. This explanation is connected with the syndrome called “Savant autism”. This syndrome is causing the situation, that some people would have limits in the many skills, but in one special skill, this kind of person would be the best in the world. Some of those persons who are “savant autistic” are making extremely perfect things by using mud.

And those persons actually make those statues automatically. If that statue is made by some savant autistic, the family of that person would like to hide that thing, because those persons are sometimes faced with the violence, because they are different than others. That’s why this statue could be buried to the ground because the community wanted to hide the syndrome.

Or sometimes some persons have thought that maybe some slave has taken the special LwaLwa statue from Africa without permissions, and afraid the consequences.

The Nampa figure is quite small, and maybe it was specially made for some purpose.  Maybe this statue is bought by some slave, who would dig it in the ground because white men punished non-christian slaves.

And that statue was the religious symbol. Some stories are told that this statue was carried by escaped slaves sometimes on the 18th. or 19th. century. But why this slave would use all that time for digging this statue so deep.

The process would take a very long time, and if this person would get help from other people, should there be some reason for that trouble.

Then this person digs that statue in the ground because that person didn’t want that it would get into the hands of the slave keepers. But those are only theories.