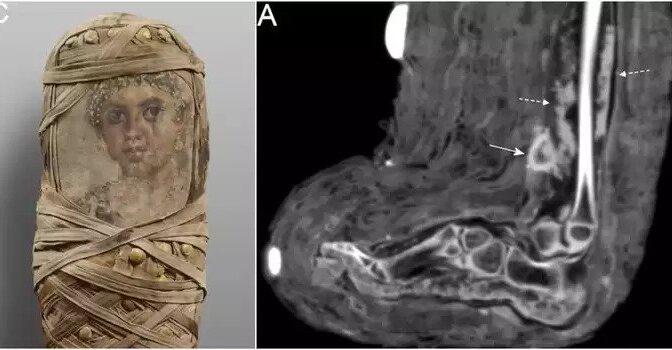 A child mummy from Egypt is the first found with a dressed wound, offering a rare glimpse into ancient medicine

Scientists found the first recorded example of a bandaged wound on a mummified body, which could offer more insight into ancient medical practices. The finding was published in the International Journal of Paleopathology, a peer-reviewed journal, on December 30.

The researchers said they discovered the bandages on the remains of a young girl, aged no more than four years, who died about 2,000 years ago. The dressing wrapped a wound that showed signs of infection, the study said.

“It gives us clues about how they [ancient Egyptians] treated such infections or abscesses during their lifetime,” Albert Zink, head of the Institute for Mummy Studies in Bolzona, Italy, and an author on the study, told Insider.

The mummy was thought to be taken from the “Tomb of Aline” in the Faiyum Oasis, located southwest of Cairo, the study said. The finding had come as a surprise to the scientists, who didn’t set out looking for the bandages.

“It was really exciting because we didn’t expect it,” Zink said. “It was never described before.”

A rare glimpse into medical history

Ancient Egyptians are thought to have had an adept understanding of medical practices.

They wouldn’t have known things we would now take for granted, like how a heart functions, how microbes cause infection, or how rogue cells cause cancer — but they did have a fairly good idea of how to treat symptoms of disease, Zink said.

“We know from other evidence, like papyrus, that they had a good experience of treating wounds and injuries,” said Zink.

So it’s surprising that these types of bandages have never been seen in a mummy before, he said.

In this case, Zink said, the bandages were spotted while the scientists carried out routine CT scans of mummies, as can be seen in the scans below and annotated with the full-lined arrow. The wound appeared to have been infected when she died, as the scans showed signs of “pus,” Zink said. These signs of infection are marked by the dotted arrows in the scans below.

“It’s very likely that they applied some specific herbs or ointment to treat the inflammation of this area,” which further analysis could identify, Zink said.

Zink said he wanted to get samples from the area to understand what caused the infection and how people at the time treated it.

But that could entail unwrapping the mummy, which Zink said he was reluctant to do. Another option would be to collect a sample using a biopsy needle, he said.

Mystery of the missing bandages unfurls

Zink says there was no clear explanation why, in this particular case, the bandages were left in place.

“The question is whether it was just left in place and it remained despite the embalming process or whether they placed it,” he said, referring to the embalmers.

Wound dressings typically did not survive the mummification process. But it’s possible the embalmers added the bandage on the body after the girl’s death.

Ancient Egyptians believed that the mummified body should be as perfect as possible for life after death, Zink said: “Maybe they tried somehow to continue the healing process for the afterlife.”

As to why other such examples of bandaging had not been spotted before, it is plausible that scientists had simply failed to spot them until now, or mistaken them for other mummy wrappings. Zink now hopes that more examples of mummy wrappings can be uncovered.

“There are always some surprises when we study mummies. I have now studied, I don’t know how many mummies in my scientific career, but there’s always something new,” he said.