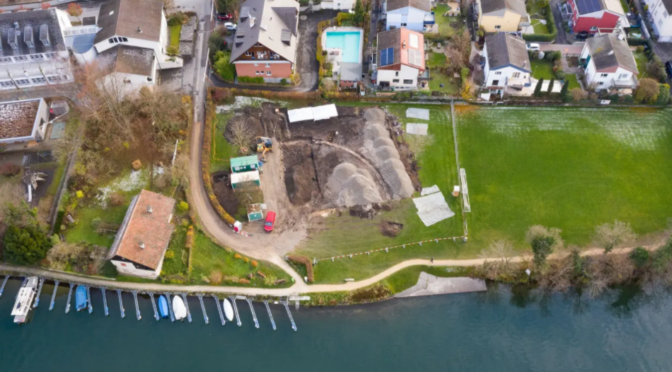 A construction project in Kaiseraugst, Switzerland has unearthed a lost ancient Roman amphitheatre that was once used for gladiator fights and animal hunts. Dating to the 300s CE, it’s about 50 meters (164ft) long and 40 meters (131ft) wide.

The amphitheatre was found in Augusta Raurica, located on the southern edge of the Rhine river. Once a Roman city, it is now an open museum and archaeological site. The reason for the construction was a new boathouse being put in for the Basel rowing club.

In December 2021, the construction team was accompanied by excavators with Aargau Cantonal Archaeology.

These archaeologists were quite surprised when they came across an ancient Roman construct.

Part of this surprise resulted from the fact that they were working in a spot thought only to be an abandoned Roman quarry.

Here are some details on how the amphitheatre was built:

It had three southern entrances. One large one stood in the middle of two smaller ones on either side of it. Another entrance was found on the western side of the amphitheatre.

Both of the entrance spots were made with sandstone that has been preserved to our present day. The inner walls were covered in plaster and the grandstands were made of wood.

It’s the third ancient Roman amphitheatre discovered in the Augusta Raurica, and also the youngest, dating to the 4th century CE.

Some of the others are known as: “Avenches (Aventicum), Martigny (Forum Claudii Vallensium), Nyon (Colonia Iulia Equestris) and on the Enge peninsula in Bern (Brenodurum)”.

The construction plans for the boathouse have been modified to accommodate the new discovery.

Here are some images of the ancient building as it is today: