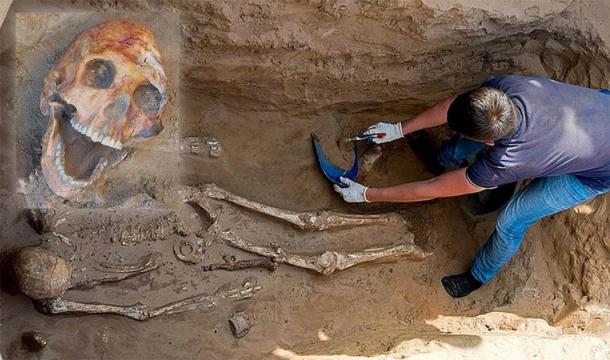 A farmer found 2,000-year-old Laughing burial skeleton in the tomb of a nomadic royal

In an ancient burial mound in the tombs of a Nomadic king, along with a “laughing” human with an oddly deformed egg-shaped skull, a farmer dug a pit on his land uncovered 2,000-year-old treasure.

Golden and silver jewellery, weapons, valuables, and artistic household items have been discovered in a grave, in the south of Russia, near the Caspian Sea, next to the chief’s skeleton.

Local farmer Rustam Mudayev’s spade made an unusual noise and it emerged he had struck an ancient bronze pot near his village of Nikolskoye in Astrakhan region. He took it to the Astrakhan History museum for analysis and an expert’s opinion on the find.

“As soon as the snow melted we organized an expedition to the village,” said museum’s scientific researcher Georgy Stukalov. “After inspecting the burial site we understood that it to be a royal mound, one of the sites where ancient nomads buried their nobility.”

The burial is believed to belong to a leader of a Sarmatian nomadic tribe that dominated this part of Russia until the 5th century AD, and other VIPs of the ancient world, including a ‘laughing’ young man with an artificially deformed egg-shaped skull and excellent teeth that have survived two millennia.

“We have been digging now for 12 days,’ said Mr. Stukalov. “We have found multiple gold jewellery decorated with turquoise and inserts of lapis lazuli and glass.”

The most ‘significant’ find is seen as a male skeleton buried inside a wooden coffin. This chieftain’s head was raised as if it rested on a pillow and he wore a cape decorated with gold plaques.

Archaeologists found his collection of knives, items of gold, a small mirror, and different pots, evidently signalling his elite status. They collected a gold and turquoise belt buckle and the chief’s dagger along with a tiny gold horse’s head which was buried between his legs, and other intricate jewellery.

Nearby was a woman with a bronze mirror who had been buried with a sacrificial offering of a whole lamb, along with various stone items, the meaning of which is unclear.

Another grave was of an elderly man – his skeleton broke by an excavator – but buried with him was the head of his horse, its skull still dressed in an intricate harness richly decorated with silver and bronze.

Also in the burial mound was the skeleton of a young man with an artificially deformed egg-shaped skull. The shape is likely to have been ‘moulded’ either by multiple bandaging or ‘ringing’ of the head in infancy. Such bandages and or rings were worn for the first years of a child’s life to contort the skull into the desired shape.

Shaping and elongating the skull in this way was popular on various continents among ancient groupings like the Sarmatians, Alans, Huns, and others. Such deformed heads were seen as a sign of a person’s special status and noble roots, and their privileged place in their societies, it is believed.

The burials date to around 2,000 years ago, a period when the Sarmatian nomadic tribes held sway in what is now southern Russia.

“These finds will help us understand what was happening here at the dawn of civilization,” said Astrakhan region governor Sergey Morozov. Excavation is continuing at the site.