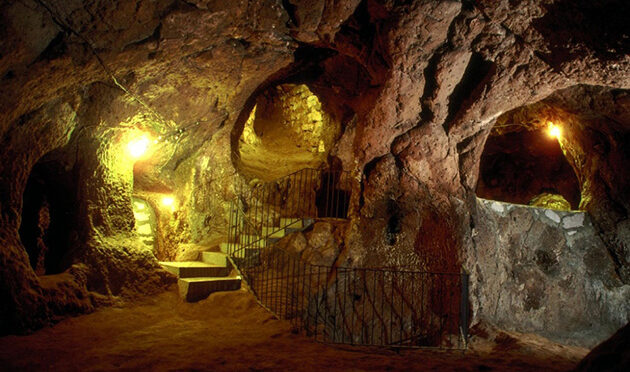 In 1963, a man in the Nevşehir Province of Turkey knocked down a wall of his home. Behind it, he discovered a mysterious room and soon discovered an intricate tunnel system with additional cave-like rooms. What he had discovered was the ancient Derinkuyu underground city in Turkey.

The elaborate subterranean network included discrete entrances, ventilation shafts, wells, and connecting passageways. It was one of the dozens of underground cities carved from the rock in Cappadocia thousands of years ago. It remained hidden for centuries.

Located almost exactly in the center of Turkey in the region best known as “Cappadocia,” this particular complex is located in the modern town of Derinkuyu.

That the man found this complex while digging out his house was surprising, as was its size, but Cappadocia was already famous for its underground dwellings. There are over two hundred known underground “cities” of various sizes in the region (most of them would more properly be called “villages” or “hamlets”).

At least forty of them have three or more levels, with Kaymakli and Derinkuyu having eight and eighteen (!), respectively. Most archaeologists believe that the caves were begun by the Phrygian people (one of the many “sea peoples” that invaded the Aegean and Turkish area from the west, and who are mentioned in ancient texts) in about the 7th or 8th centuries B.C.

Some believe the caves are older, and date from the Hittite period some five hundred years before that. Regardless of who dug it, the cave system at Derinkuyu especially was not built by “stupid troglodytes”–these were exceedingly smart troglodytes.

As one can imagine, there are many good reasons for building a city underground. First and foremost was likely defense, but of course, shelter from the weather was an important factor too. No wind, no rain or snow, protection from the blazing Mediterranean sun.

Another factor was access to water. Rivers and lakes run dry and enemies might control water sources in an effort to subdue your people, but if you are sitting directly on top of an aquifer, you’ve got all the water you’ll ever need.

The cleverness of the people at Derinkuyu is illustrated by the fact that one of the wells there (over two hundred feet down) was controlled by those on the deepest levels. Access to the wells could be closed tight with wood and stone so those above could not attempt to poison the water below.

The stone in Cappadocia is soft volcanic rock left eons ago. One might call it sandstone, from its looks, but it is not. Though relatively easy to dig through (compared to granite, for example), it was still no small undertaking for the people of Cappadocia to dig out.

This also means that the stone can be carved easily. Later troglodytic complexes include elaborate early Christian churches, with arches embedded in the ceiling.

Security was built in. Entrances were in high or in very well-hidden places. The tunnels and stairways are just wide enough for one adult to make their way through – enemy warriors could only fight one on one in the corridors.

Oil lamps lit the halls, stairways, and dwellings, and could be extinguished by retreating warriors and families to confuse invaders. Dead-ends known only to those living in the complex would also add to any confusion.

Large circular stones could be rolled into tunnels, blocking further advance. During the original Turkish invasions in the 10th century, and into the Ottoman era, these caves were used as refuge and defense.

Some of the smaller troglodyte dwellings (and that’s what they’re called) are still inhabited. Many of the others were lived in until early in the 20th century.

The large complex at Kaymakli was last used as a refuge by Anatolian Greeks fearing the massacres that were taking place in the war between Turkey and Greece in the early 1920s.

Today, many of these underground cities and towns are open to the public and are Turkish national treasures.

The large complexes at Kaymakli and Derinkuyu offer guided tours through the approximately ten percent of the cave systems that are open to the public.