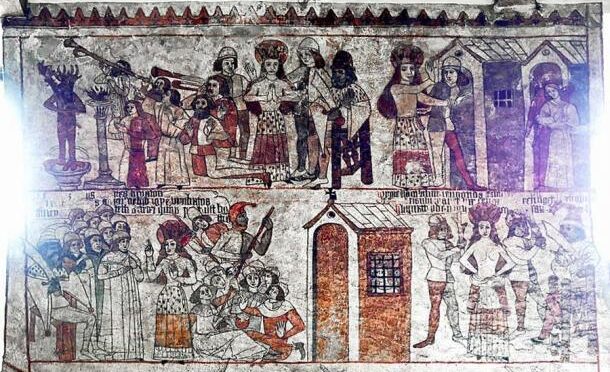 A medieval mural on the wall of a Yorkshire church pays homage to St. George

Pickering’s St Peter’s and St Paul’s Church has medieval wall paintings, one of which depicts St George killing a dragon, remain among the most complete surviving sets in all of Britain. Now, as today marks the feast of St George, this Roman soldier is honoured once again as a champion of the nation’s sword and a symbol of its lasting might.

Today flags are to be flown across Yorkshire, with trumpeters on standby and bunting strung, incautious and socially distanced celebration of St George’s Day. At the small church in Pickering, where Scouts might normally have paraded under the red and white flag, campaigns call-in donations instead to preserve these cherished jewels.

“This is our country’s patron saint,” said churchwarden Pam Robb, as she reflected on the meaning of the feast day in a year of so much change.

“It’s the sense of a nation coming together to celebrate that. It reminds us of our heritage, and what people have gone through in the past.

“This is a little window, isn’t it, to a past life and how people lived and grew up,” she added, of the murals themselves.

“To think of the generations of people who grew up with these stories, and who would have looked up at these walls, is incredible. It shows perseverance.”

The Norman church in Pickering, which was rebuilt in the 12th century, stands on the site of an earlier Anglo-Saxon church, of which only part of the font and the stone cross remain.

The paintings, believed to have been commissioned in around 1450, depict scenes of saints and bible stories, bringing them to life for a congregation that was unable to read.

Under Reformation, many such symbols were hastily destroyed, though the congregation here kept them carefully hidden under a layer of whitewash paint.

With the passing of time, their existence was completely forgotten, until they were rediscovered by the Rev John Ponsonby in 1852, to his utmost dismay.

Decrying the paintings as a ‘ridiculous’ distraction, he had defied the wishes of the then Archbishop of York to have them covered once again, but not before drawings were made.

Some remnants of these drawings remain, with fragments from the original paintings forming the basis for a palimpsest of imagery rare in its antiquity.

A sense of wonder

Today, the church is keen to draw donations following a year where it has seen fewer visitors, with a link here to its website under Rev Gareth Atha. These images, said Mrs Robb, do inspire a sense of wonder.

“People walk in and see these figures, and just stand there in awe,” she said. “There is a little jewel in the crown here, and people don’t realise.

“These paintings were people’s stories until they could begin to be written down.”

City halls and clocktowers in cities such as Bradford and Wakefield are to be lit up in red and white today to mark St George’s Day, while flags are to be flown and bunting hung.

At the outdoor Pontefract Market, professional trumpet player John Barker has been commissioned to play.

“It’s a national day that should be celebrated,” he said. “People appreciate live music, in particular, I think we’ve all come to realise what matters in life.”