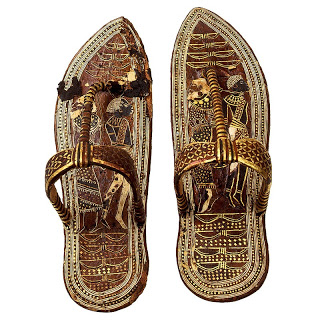 During the ancient Egyptian period, people mostly traveled barefoot. It is believed that since the temperature in Egypt was very high throughout the year, people gave less importance to wearing footwear.

There is hardly any record to suggest that the Egyptians wore shoes or any other form of footwear.

The ancient Egyptians began wearing sandals during the early years of the New Kingdom rule.

The sandals used by these people were very simple and were made either by using straw, reeds or leather.

The wealthy people wore leather sandals and these lasted for a longer time than the sandals which were made using straw or reeds. The sandals were worn by all people belonging to all the classes except those who were extremely poor.

The sandals were decorated by using beads, jewels; some also had buckles on the straps made from precious metals. For the most part, the ancient Egyptians walked without wearing sandals or shoes.

Sandals were worn by people on special events. The gold and wood sandals are known to have been made in the ancient Egyptian period.

For researchers, the wow-factor is in the craftsmanship. “The technology employed that’s the most wow thing for us, looking at the detailed, minute, skilled craftsmanship of the Ancient Egyptians is really mind-blowing,” Ikram explained.

“With some of Tutankhamun’s shoes, they used bits of gold, birch bark, bone and maybe even glass inlays to decorate and create luxurious and glamorous footwear.”

Studying how the Egyptians made such luxurious footwear, researchers discovered that the ancient Egyptians adapted and maintained traditional styles and technologies throughout millennia.

“It’s interesting to see that there are not too many advances in the technology, but we do see things that were established and then carried on,” Ikram noted. “For example, there’s skeuomorphism, that is something originally made in one material is translated into something of far more precious material.

Sometimes you have fancy footwear that looks like regular footwear, but it’s made out of gold or it has gold accents.”

During the Middle and New Kingdoms time, the sandals were commonly used. The use of covered shoes by the ancient Egyptians is not very well known. However, some records suggest that shoes were made by weaving palm fiber and grass.

In the Early Middle Kingdom, shoes were a modification of sandals. Shoes had straps between the toes and were joined to the sides at the heel. It also had a leather cover which protected the feet.

The Hittites settled in Anatolian highlands wore shoes with turned up toes. The Egyptians during the New Kingdom period are said to be influenced by the Hittites and began using shoes.