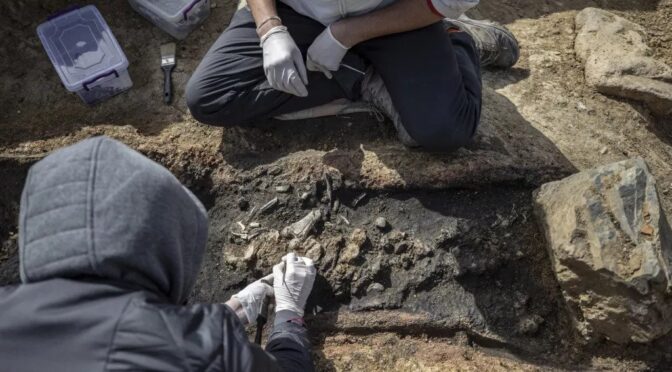 A 2,300-year-old brick tomb contains the cremated remains of an individual whose body was likely placed in the tomb and then set on fire, archaeologists in Istanbul have announced. A tomb-like this is a rare find, archaeologists say.

At the time this person was buried, the area was known as Chalcedon, then a flourishing city during the Hellenistic era. The tomb, which contains the cremated remains of at least one person, was found at the Haydarpaşa Train Station in Istanbul.

Archaeologists also found a terracotta goblet and a perfume bottle within it, Rahmi Asal, director of the Istanbul Archaeological Museums, told the Turkish government-owned Anadolu Agency.

“This is very valuable. It is one of the oldest finds in this area,” Asal told the news agency, adding that “perhaps this will give us many more valuable insights” into the area’s past.

The excavation was carried out prior to the renovation and expansion of the railway system in the region and has unearthed remains throughout Istanbul’s history.

Although the individual’s body was buried inside the tomb, some of the bones survived, a preliminary analysis revealed. “I have never seen this type of a cremation tomb from the Hellenistic period,” Asal said.

At the time the tomb was built, Chalcedon was a thriving city. “Chalcedon was a powerful player in international politics,” Noah Kaye, an assistant professor of history at Michigan State University who is not involved with the new excavation, told Live Science in an email.

Kaye noted that between 235 B.C and 220 B.C., Chalcedon, along with Byzantion (a nearby city), levied heavy tolls on ships passing through the Bosphorus strait, which separates Asia from Europe, into the Black Sea.

The cities extracted the tolls with the help of Egypt’s navy, which was then under the control of the Ptolemaic dynasty.

Despite Chalcedon’s success at the time, some ancient writers referred to Chalcedon as the “land of the blind” because there were other supposedly other areas nearby that were better suited for a city.

In the fourth century A.D., the Roman emperor Constantine founded Constantinople, a city that would eventually engulf both Byzantion and Chalcedon and become the centre of the Byzantine Empire.

The discovery of the tomb may help shed light on what Chalcedon was like, Felix Pirson, director of the German Archaeological Institute’s Istanbul branch, told Live Science in an email. “It looks like a very important discovery indeed,” Pirson said, noting that we know little about what this area was like before Constantinople was founded.

“More information about burial customs and funerary culture in general, which sheds a light on crucial topics such as social differentiation or identities, is of utmost importance,” said Pirson, who was not involved in the discovery of the tomb.