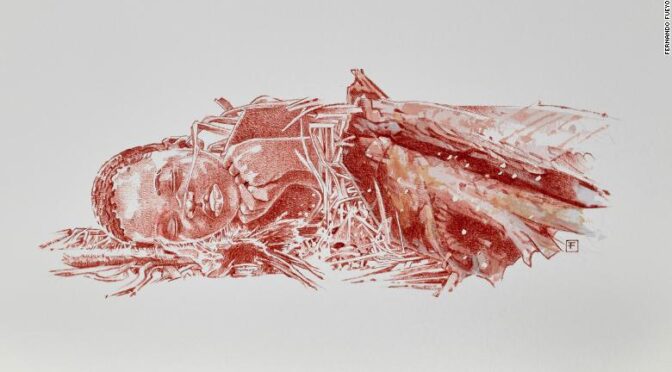 A village in East Africa buried a boy aged around 3 years old 78,000 years ago. Its caretakers dug a shallow pit, curled its small body, and may have rested its head on a pillow before committing the body to the earth.

According to a new study, the discovery of the child’s grave has revealed the earliest recorded traces of early humans burying their dead in Africa.

“It’s beautifully excavated … and there can be no dissension that it’s a burial,” says Paul Pettitt, a palaeolithic archaeologist at Durham University who studies ancient mortuary practices and was not involved with the work. “It shows that the tradition of burying some of the dead … probably arose from a common custom amidst Homo sapiens in Africa.”

Intentional burials are relatively rare in the archaeological record before about 30,000 years ago. Previously, the oldest suspected burials in Africa dated to 74,000 and 68,000 years ago—in South Africa’s Border Cave and in Taramsa, Egypt, respectively. In Eurasia, burials of modern humans and Neanderthals up to 120,000 years old have been found, but those involved peoples who contributed little to humans living today.

The new grave was found in 2013 under the rocky overhang of a cave called Panga ya Saidi along the coastline of southeastern Kenya. Archaeologists and local workers noticed an unusual, pit-shaped undulation of sediment within the walls of one of their trenches.

When they inspected it, a small bone fell out—and promptly turned to dust. Realizing they had found an extraordinarily delicate fossil, the archaeologists spent the next 4 years painstakingly digging and casting the fragile bones in plaster. Two teeth later analyzed at the National Museums of Kenya unambiguously identified the body as a human child.

The researchers then sent the remains to a lab at the National Center for Research on Human Evolution in Burgos, Spain, for further analysis. Virtually sorting through the layers of bone and dirt using computerized tomography, scientists analyzed the bones.

They couldn’t determine how the child had died, but its position suggested caretakers had deliberately curled it into a fetal position before placing it into a shallow pit, explains the study’s senior author, Michael Petraglia, an archaeologist at the Max Planck Institute for the Science of Human History.

The skeleton’s torqued shoulder indicates it was likely wrapped tightly in a shroudlike material, and the way the skull twisted and bent inside its grave suggests it may have been propped up on some sort of pillow that slowly decayed.

A technique that tells scientists when sediments were last exposed to light revealed the remains were deposited about 78,000 years ago, making this the oldest known human burial site in Africa, the researchers report today in Nature.

As complex symbolic behaviours, including jewellery use and ochre pigment painting, are thought to have arisen in Africa, the birthplace of our species, about 125,000 to 100,000 years ago, it’s reasonable to think that human burial may have also emerged there and spread around the world with early migrants from the continent, Petraglia says. It’s not clear though, he says, whether Neanderthals independently began to bury their dead or the roots of burial-related behaviours go back to the common ancestor of humans and Neanderthals.

Nearly half of such ancient burials involve children, Petraglia points out. Dying young may have been seen then, as now, as particularly tragic, prompting the community to commemorate the death. “Here we have a child where the legs are pulled up to the chest, in a small pit—it’s almost like the womb,” Petraglia says.

Julien Riel-Salvatore, an anthropologist at the University of Montreal, agrees that the level of care that went into Mtoto’s burial suggests a child’s death was especially poignant.

“The idea that people would go out of their way to preserve the child’s body, which would slow its decay and protect it from scavengers, reflects the fact that people cared deeply about their children,” he says.

More burials from the region and time period will need to be discovered before researchers can start to puzzle out the significance that burial held to these ancient humans, says Louise Humphrey, an anthropologist at the National History Museum in London. Still, she says, the tenderness of the burial in Panga ya Saidi reveals “an expression of personal loss”—a sorrow that transcends time.