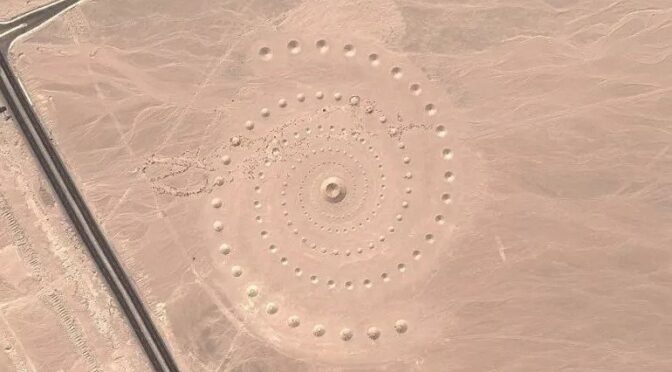 What is this Bizarre structure found in the Egyptian desert?

To some viewers, it looks like a landing strip for extraterrestrial spacecraft — or perhaps the portal to a parallel universe, if not an ancient monument to a benevolent deity who had a keen eye for design and symmetry.

But what people are actually seeing in the desolate reaches of the Egyptian desert, just a short distance from the shores of the Red Sea is in fact an environmental art installation. And it’s been baffling tourists and armchair travelers since it was constructed in March 1997.

Danae Stratou, Alexandra Stratou, and Stella Constantinides worked as a team to design and build the enormous 1 million square foot (100,000 square meters) piece of artwork — called Desert Breath — to celebrate “the desert as a state of mind, a landscape of the mind,” as stated on the artists’ website.

Constructed as two interlocking spirals — one with vertical cones, the other with conical depressions in the desert floor — Desert Breath was originally designed with a small lake at its center, but recent images on Google Maps show that the lake has emptied.

The entire structure, in fact, is slowly disintegrating as the sand that forms the art piece slowly blows off its cone-shaped hills and fills in its depressions, making it “an instrument to measure the passage of time.”

The art piece joins other mysterious images and environmental artworks that fascinate viewers on Google Earth, Google Maps, and other online platforms.

For example, the wind-blown steppes of Kazakhstan are home to a large pentagram etched into the Earth’s surface on the shores of a desolate lake.

The five-pointed figure bedeviled viewers’ imaginations until it was revealed to be the outline of the roads in a Soviet-era park.

The star was a popular symbol in the U.S.S.R., and Kazakhstan was part of the former Soviet Union until that union dissolved in 1991.

And etched onto the desert floor of New Mexico are two large diamonds surrounded by a pair of overlapping circles.

This is reportedly the site of a hidden bunker belonging to the Church of Scientology, according to the author of a book on the religious group.

The creators of Desert Breath have no political or cult-like aspirations, however: “Located … at the point where the immensity of the sea meets the immensity of the desert, the work functions on two different levels in terms of viewpoint: from above as a visual image, and from the ground, walking the spiral pathway, a physical experience.”