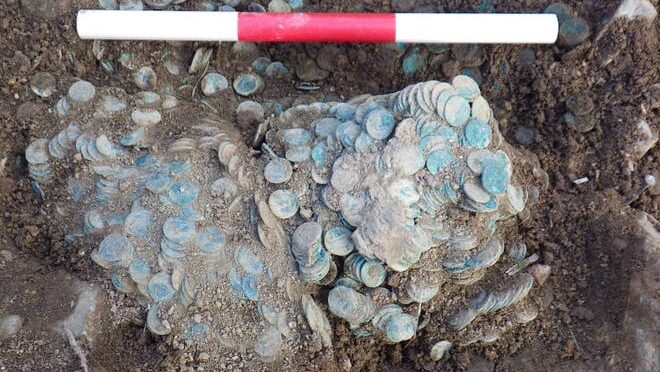 An enthusiast of an East Devon metal detector has stumbled on one of Britain’s largest hoards of Roman coins ever discovered, prompting a local museum to launch a campaign to buy the “remarkable” collection for the nation.

It is the fifth-largest discovery of Roman coins in Britain, comprising approximately 22,000 coins dating back more than 1,700 years. The British Museum announced the discovery of the Seaton Down Hoard

Laurence Egerton, 51, a semi-retired builder from East Devon, discovered two ancient coins “the size of a thumbnail” buried near the surface of a field with his metal detector in November last year.

After digging deeper, his shovel came up full of the copper-alloy coins. “They just spilled out all over the field,” he said. “It was an exciting moment. I had found one or two Roman coins before but never so many together.”

The metal detectorist called in the experts and watched amazed as archaeologists discovered thousands of more coins buried about a foot deep. To ensure the site did not tamper with Mr Egerton slept in his car nearby “for three cold nights” until the dig was finished.

“It’s by far the biggest find I’ve ever had. It really doesn’t get any better. It is so important to record all of these finds properly because it is so easy to lose important insights into our history,” Mr Egerton said. He found the coins near the Honeyditches site in Devon where a Roman villa had previously been excavated.

Bill Horner, county archaeologist at Devon County Council, said: “We realised the significance and mobilised a team as fast as we could.” He continued: “The coins were in remarkably good condition. Coming out of the ground you could see the portrait faces; a family tree of the House of Constantine.”

Over the past 10 months the coins have been lightly cleaned, identified and catalogued at the British Museum, although there is still more work to do. They range from late AD 260 to almost AD 350. Mr Horner said the coins bore a range of portraits, describing it as a “family tree of the House of Constantine”.

The British Museum called the scale of the find “remarkable”, adding that it was “one of the largest hoards ever found within the whole Roman Empire”. The largest find in Britain was the Cunetio Hoard of almost 55,000 coins discovered near Mildenhall, Wiltshire in 1978

The coins would not have been particularly valuable at the time; with experts estimated they would then have been worth about four gold coins, equivalent to a worker’s pay for two years. The Royal Albert Memorial Museum & Art Gallery in Exeter hopes to raise money to buy the collection and appealed to the public to donate.

The hoard is yet to be fully valued, but one expert said it would be worth less than £100,000. The proceeds will be split between Mr Egerton and the landowner, Clinton Devon Estates.

One of the coins is particularly special. It marks the one millionth find of the Portable Antiquities Scheme, set up in 1997 to provide a record of all the finds brought in by members of the public. The scheme is managed by the British Museum and funded by the Department for Culture, Media, and Sport’s grant-in-aid to the institution.

Neil MacGregor, director of the British Museum said: “You know what it’s like; you sit waiting for the millionth object to come along and 22,000 come along at once.”

The special coin, called a nummus, was struck by Constantine the Great to celebrate the inauguration of the new city of Constantinople, now Istanbul.

The scheme was set up to keep track of all the finds by metal detectorists and enthusiasts and provide a resource for scholars to study historical objects. Since 1997 a total of 500 Roman coin hoards have been discovered across the country.

Major finds since the PAS scheme was set up include the Staffordshire Hoard, dating to the 7th century, the largest Anglo-Saxon hoard of gold and silver ever found. There have also been significant Viking and Bronze Age finds.

The British Museum said recording the finds has helped revolutionise the understanding of battlefields including Naseby in 1645 and the Battle of Bosworth in 1485. There, the find of a silver-gilt boar badge helped pinpoint where Richard III met his death.