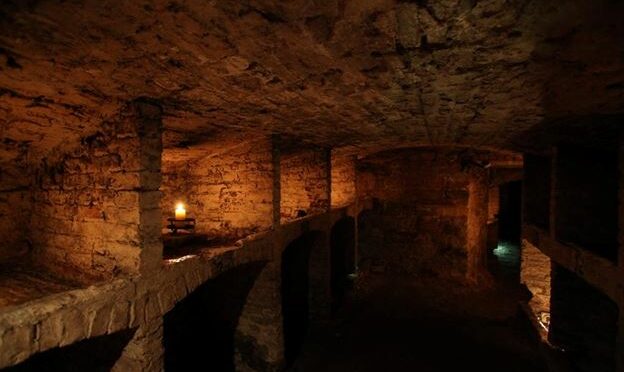 An archaeological dig in Scotland reveals the medieval building

Archaeologists working in the Scottish town of Dunfermline have uncovered the remains of a medieval building.  Dig Dunfermline was a community project that included an archaeological team and 83 volunteers who spent several weeks examining an area where a museum and art gallery will be built next spring.

The test dig discovered a building in the southeast corner of the car park just to the north of the Abbey graveyard.

This year’s full dig revealed only three courses of the foundations of the structure and there was very little in the way of dating evidence.

However, archaeologists are confident that it is the remains of a medieval building – we’re just unsure what it was used for.

There will be more investigation in the block-paved car park area before the construction work on the new museum starts.

Perhaps one of the smallest finds from the site was a small fragment of pottery that has been identified as a stove tile that would have formed part of a smokeless stove.

North German in style this tile is probably from the 16th century and is a rare example of a prestigious, high quality and desirable household device.

Not only does this show the wealth of some of the homes in Dunfermline, but also the trading links across the North Sea into Germany and the Baltic States.

The remarkable discovery of fragments of preserved leather will provide great information as to how the early monastic community lived.

Discovered at the very base of the excavation within waterlogged sediment this material will allow for accurate dating of this earliest midden deposit and has changed the understanding of this area.

Such a boggy midden suggests a damper and more unpleasant environment to the east of the Abbey than was previously thought, showing the Abbey to have been sited on a rise when approached from the east.

Councillor Helen Law, Chair of the City of Dunfermline Area Committee said, “I think these are excellent and exciting discoveries that show what can be revealed when we excavate within an important burgh.

The dig was a real community effort that created a lot of interest in what was going on and I’m thrilled that so many local people have already been involved in helping make the new museum and art gallery a reality.”

Douglas Speirs, Archaeologist for Fife Council added, “It was so encouraging to see the project team commit sufficient resources to undertake such a thorough archaeological excavation.

Combining planning requirements with the public’s enormous appetite for local heritage has surpassed expectations and resulted in real, immediate and tangible benefits for the whole community.

“Due almost entirely to the hard work of the scores of volunteers we have shed more light on Dunfermline’s medieval past than any previous excavation.

The project is contributing a great deal to the history, identity and future economic potential of Dunfermline as a premier cultural destination and this dig is already being hailed as an exemplary approach in community archaeology!”

Along with the people who participated, another 500 people visited during the dig to find out about the project and nearly 100 children took part in specially organized events for young people.