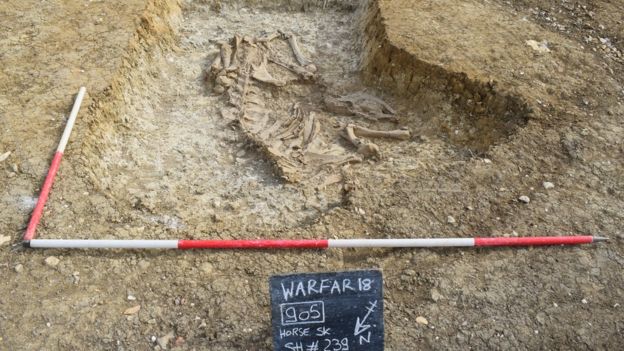 Roundhouses of the Iron Age, Roman burials and Saxon pottery were found in a “hugely important and hitherto unknown settlement”.

Archaeologist Stephen Macaulay said: “We almost never find actual physical evidence of this.” The settlement reverted to agricultural use after the 7th Century.

“What makes this site really significant is we have evidence of early Saxon occupation mingled with the latest Roman remains,” said Mr. Macaulay, deputy regional manager for Oxford Archaeology East.

He added: “This a rare example of the Roman to Saxon transition in the east of England.”

The earliest finds include eight roundhouses, some of which date back to about 100BC, three crouched human burials and 2,500-year-old pottery remains.

They also “seem to have stumbled upon a shrine” and discovered cattle skulls and a largely intact horse skeleton, which they believe could be votive offerings.

The site was excavated ahead of a housing development by Bellway Homes.

An initial evaluation in May last year revealed extensive Roman remains, but the Iron Age settlement was not revealed until the main excavation began later that year.

Mr. Macauley said the dig has uncovered “a hugely important and a hitherto unknown settlement”.