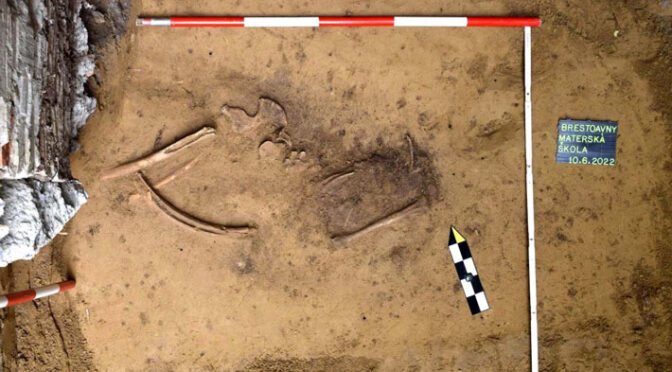 Builders found human bones when doing reconstruction on a kindergarten in Brestovany, a village near Trnava. They called archaeologists from the Monuments Board of Trnava and the Western Slovakia Museum in Trnava who found that the builders had discovered a grave.

More detailed research showed that it is a 4,000-year-old grave from the Early Bronze Age containing women’s jewels, such as bone beads, a copper bracelet and two willow-shaped earrings, the Monuments Board Trnava informed.

The skeleton belonged to a woman buried in a curled position on her left side.

Based on the found objects and the character of the grave, archaeologists were able to classify the discovery as from the Early Bronze Age, specifically to the bearers of the so-called Nitra culture.

It belongs to the oldest culture of the Bronze Age in Slovakia and its representatives are characterised by the gradual introduction of bronze production, an alloy of already used copper with tin, which resulted in the metal of better strength and hardness.

“Uncovering the grave was a bit different than usual because all the classes of the local primary school and kindergarten arrived to watch our research and discoveries,” archaeologist Peter Grznár said.

Uncovering the grave thus changed to a live exhibition of archaeologists’ work and lessons about the life and tradition of our ancestors.

The kindergarten is located in the area of the national cultural monument manor house and park in the cadastral area of Malé Brestovany.

The manor house dates to the period of classicism from the first half of the 19th century. However, its location on a slight ridge is interesting, which could have also been attractive as a prehistoric settlement.