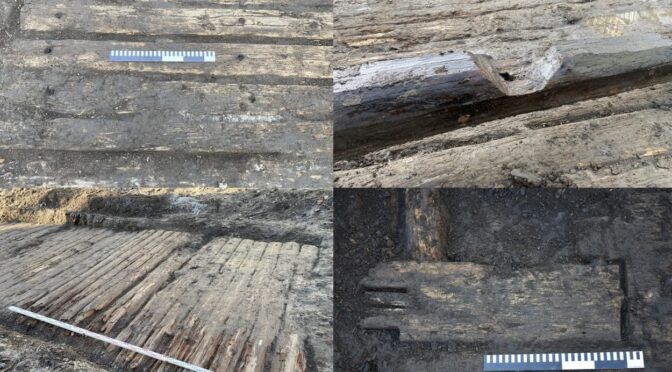 Archaeologists have discovered a well-preserved stretch of a late 17th or early 18th-century wooden road in Jarosław, southeastern Poland. At 100 feet long, it is one of the longest wooden roads ever discovered in what is now Poland.

The remains were discovered in February during archaeological exploration of the site of planned sewer work in the historic centre of the city.

The road led to a gate in the city walls opening west towards Kraków. It was part of a 250-mile route connecting Bielsko Biała to Lviv in modern-day Ukraine. It was a dirt road, except for the section inside Jarosław.

The road was 10 feet wide, so must have been one-way traffic only because that was not enough space for two lanes. It was made of timbers mounted on transverse wooden joists. The wood was probably oak and it was very sturdy.

There are no hoof marks or wheel ruts even though it must have been a busy street as Jarosław held one of the largest market fairs in Europe and was a major hub of trade in the region. It was in active use for about 100 years before paved roads were built over it.

Some of the roads have been removed to the Jarosław Museum for conservation and study. Objects found during the removal of the timbers — coins, show leather, nails — will go on display in the museum.

The section still in place will be displayed in situ in the coming months.

The road was laser scanned before removal so a detailed animated model could be made accurate to the millimetre.