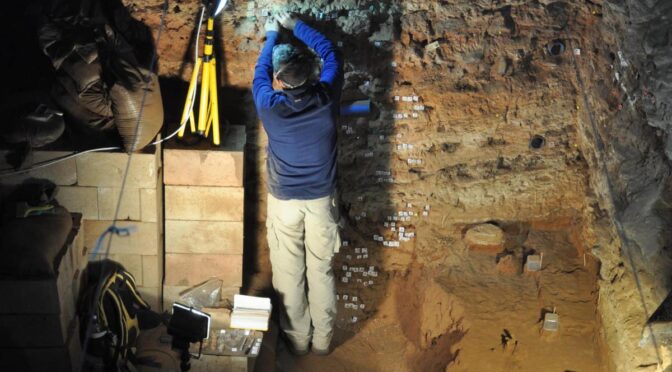 Archaeologists have identified Wonderwerk Cave in South Africa’s the Kalahari Desert as the world’s oldest home, thanks to new evidence confirming the theory that early humans were already occupying the site 2 million years ago.

The dates for the cave—named for the Afrikaans word for “miracle”—were determined by testing the cave sediments, according to a new paper in Quaternary Science Reviews by researchers from the University of Toronto and the Hebrew University in Jerusalem.

“We can now say with confidence that our human ancestors were making simple Oldowan stone tools inside the Wonderwerk Cave 1.8 million years ago,” lead author Ron Shaar said in a statement.

Wonderwerk is “a key site for the Earlier Stone Age,” according to the paper, but archaeologists have never found human remains there. Instead, the dating was obtained by investigating the different rock laters, also known as the stratified sedimentary sequence, reports Haaretz.

The cave contains traces of basal sediment, produced by retreating glaciers grinding against the bedrock, which would have to have been tracked in by early humans.

Using magnetostratigraphy, a branch of stratigraphy that detects variations in the magnetic properties of rocks, the researchers dated 178 samples from the cave.

Measuring the magnetic signal of these ancient clay particles revealed the direction of the earth’s magnetic field—which changes poles every half million years or so—when the dust first entered the cave.

“Since the exact timing of these magnetic ‘reversals’ is globally recognized, it gave us clues to the antiquity of the entire sequence of layers in the cave,” Shaar explained.

The findings dated some of the sediment to 2 million years old. That matched the results that study team member Michael Chazan reached using cosmogenic dating in 2008. That earlier research, which many scholars rejected, measured cosmogenic nuclides caused by exposure to cosmic rays, which are produced and decay at a known rate. The new study also used this technique as a secondary dating method.

“Quartz particles in the sand have a built-in geological clock that starts ticking when they enter a cave,” Ari Matmon, another coauthor of the paper, added. “In our lab, we are able to measure the concentrations of specific isotopes in those particles and deduce how much time had passed since those grains of sand entered the cave.”

The cave also contains ancient stone tools such as hand axes, and the first evidence of early humans using fire, some one million years ago, as first reported in a 2012 study in the journal Proceedings of the National Academy of Sciences.

The evidence of the fire was found deep enough in the cave that it could only have been the result of human activity, not brought there by wildfire.

Though humans occupied the cave continuously over the last 2 million years, it was not discovered by modern humans until farmers came upon it in the 1940s. Excavations have been ongoing ever since.