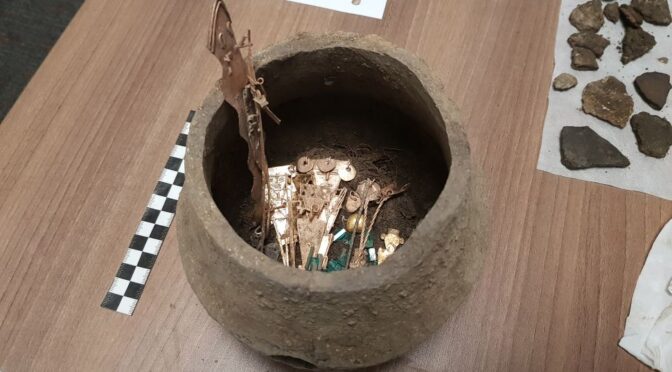 Archaeologists in Colombia have found eight ceramic jars, with metallic figurines and emeralds inside, within a temple and its adjacent graves.

The ancient Muisca (also called the Chibcha) crafted the jars called “ofrendatarios” about 600 years ago. The Muisca, a people whose civilization flourished in the region at the time, were famous for their metal-crafting skills, and their work may have inspired the legend of El Dorado — a legendary city made of gold.

Between 1537 and 1540, the Spanish conquered the region, and many of the Muisca were killed during fighting or due to disease. Despite the destruction, the Muisca persevered and thousands of their descendants live on today.

Archaeologists uncovered the temple and graves in the remains of an ancient Muisca town located near Bogotá, the modern-day capital of Colombia.

Some of the figurines look like snakes and other animals, while others look more like people with headdresses, staffs and weapons. The temple where the ofrendatarios were found may be related to ancestor worship.

“It’s very difficult to establish, I think there was some type of cult of the ancestors,” Correa told Live Science.

Ofrendatarios like these have been found at other ancient Muisca sites and may have been offerings of sorts. They have artefacts inside that often include metallic figurines and emeralds.

The temple and ofrendatarios may also be related to deities worshipped by the Muisca, said Correa, noting that they worshipped a variety of gods, including those associated with the moon and sun.

The Muisca were regarded as experts in metal crafting. When the Spanish encountered the Muisca, they were particularly amazed at their goldwork. There were no gold mines nearby, so the ancient Muisca traded for the metal with other groups.

As for whether the Muisca metalwork — especially their goldwork — inspired the legend of El Dorado, Correa said the group did have a tradition in which during certain ceremonies a chief would appear covered in an ointment that included gold particles.

This ceremony “was one of the motivations of this myth,” said Correa. The ceremony was witnessed by Spaniards and recorded in Spanish chronicles; the story along with the Muisca’s goldwork helped inspire the legend.

Correa worked with the Museo Del Oro & Xavierian University’s Industrial Engineering department to conduct the excavation. He also got assistance from Artec 3D, which provided an Artec Eva scanner that he used to create 3D scans of the artefacts.