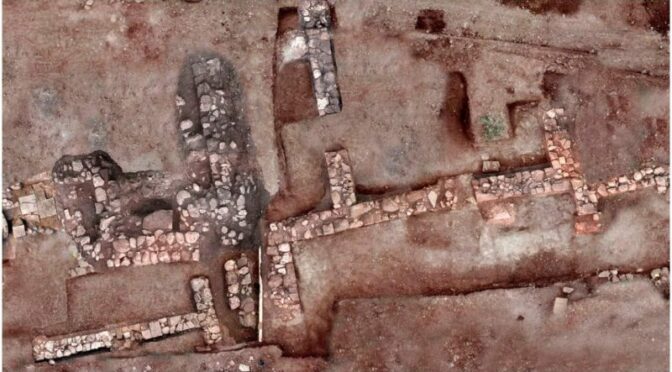 The story goes, that Tenea was founded by the survivors of the Trojan War in the 12th or 13th century BC, Until now, its location (and very existence) was entirely reliant on the words of historical text.

But the Ministry of Culture of the country announced the discovery of jewelry, pottery and even infrastructures by a team of archeologists, seemingly confirming where it was on a site near the village of Chiliomodi in southern Greece.

It’s a city that the ancient Greeks thought was settled by Trojan captives of war after the sack of Troy in the 12th or 13th century BC and up to now showed up only in texts.

Also found were household pottery, a bone gaming die, and 200 coins dating from the 4th century BC and up to later in the Roman era.

Specifically, coins discovered were dated to the era of Roman emperor Septimius Severus, who ruled from 193 to 211.

Past digs have found clues near the city, but the most recent excavation uncovered the “city’s urban fabric,” including floors, walls and door openings, the culture ministry said, according to USA Today.

An unsettling discovery was a pottery jar containing the remains of two human fetuses, within the foundations of a building. Usually in Greek culture, the dead were buried in cemeteries.

Legend says the city thrived until the end of the Roman Empire, at which point it seems to have been damaged in a Gothic invasion. According to the Ministry, the city may have been left deserted in the 6th century CE during the Avar and Slavic raids.

Lead archaeologist Elena Korka told the Associated Press that the discoveries indicated the citizens of Tenea had been “remarkably affluent.”

The city would have been located on a trade route between the cities of Corinth and Argos in the northern Peloponnese.

“(The city) had distinctive pottery shapes with eastern influences, maintained contacts with both east and west… and had its own thinking, which, to the extent that it could, shaped its own policies,” she told the AP.

Throughout history, not much was known about Tenea, apart from ancient references to the reputed link with Troy and to its citizens having formed the bulk of the Greek colonists who founded the city of Syracuse in Sicily.

Korka said more should emerge during the excavations, which will continue over the coming years.

″(The city) had distinctive pottery shapes with eastern influences, maintained contacts with both east and west … and had its own way of thinking, which, to the extent that it could, shaped its own policies,” she said.

According to Reuters, among the findings was a golden coin to pay for the journey to an afterlife and an iron ring with a seal that depicted the Greek god Serapis sitting on a throne, Cerberus, which is a three-headed mythical dog that guards the gates of Ades, beside him.

The Trojan War is believed to have taken place near the end of the Bronze Age, around 1200 B.C. It took place around the time that a civilization called Mycenaean was active in Greece. They built palaces and developed a system of writing.

The earliest accounts of this war come from Homer, who lived around the eighth century B.C., several centuries after the events that took place. They do not appear to have been written down until even later, likely during the sixth century B.C.

The site of Hisarlik, in northwest Turkey, has been identified as Troy. It was inhabited for almost 4,000 years starting around 3000 B.C. After one city was destroyed, a new city would be built on top.

“There is no one single Troy; there are at least 10, lying in layers on top of each other,” writes University of Amsterdam researcher Gert Jan van Wijngaarden in a chapter of the book Troy: City, Homer, and Turkey.