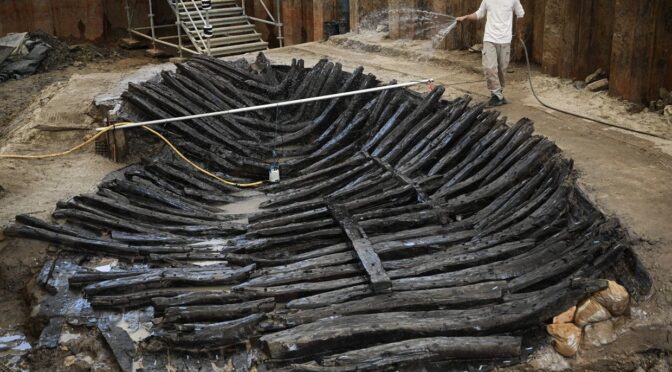 A 1,300-year-old shipwreck is so fragile that air could destroy it has been unearthed in southern France and archaeologists face a race against time to reveal its medieval secrets. The partial remains of the “extremely rare” 40-foot-long boat, which radiocarbon dates from between A.D. 680 and A.D. 720, were unveiled at Villenave-d’Ornon near Bordeaux on Wednesday.

The French National Institute for Preventive Archaeological Research said the boat was an “exceptional testimony to the naval architecture of the high Middle Ages” and could have navigated rivers, as well as the Atlantic coast of France.

“In order to limit the degradation of the wood of the wreck, especially at the moment with the heatwave in the southwest of France, we are watering the wreck every 30 minutes,” Laurent Grimbert, who is leading the excavation for the institute, told NBC News via email Thursday.

“The excavation and dismantling of the wreck should be finished by mid-September. For the moment we are on schedule and each piece of wood that is dismantled teaches us more about the shipbuilding techniques of the early Middle Ages.”

The boat was discovered in 2013, buried in the silted bed of a stream. But it is only now being painstakingly taken apart piece by piece to discover its true nature and purpose.

Because the beams of oak, chestnut and pine have not had contact with oxygen and light for so long, they must be watered to stop them from splintering. Once removed and cleaned, the wooden beams will be submerged in water.

The boat’s final fate is uncertain: The wood could be injected with resin to preserve it or it could be reburied where it was found.

Early investigations show the vessel was capable of carrying large cargo, the institute said on its website.

There is only one other boat from the period in France — found in the Charente River in southwestern France, it’s still underwater — and only a handful have ever been found in Europe.

Experts are keen to understand how and why the boat was in the stream alongside the Garonne River.

“The existence of a small port, near the mouth of a side stream of the Garonne, in a marshy area exploited since antiquity and throughout the medieval era, indicates that these apparently unattractive sectors are actually exploited for their many resources,” the institute said.

The boat dates to the time of the Franks, a tribal people who came to dominate large swaths of western Europe in the centuries following the fall of the Roman Empire.

The ruling faction of the Franks at the time, the Merovingians, were known for their kings’ long hair.

Clovis I, their most famous king, is credited as the first to unite the Franks under one kingdom. Former French President Charles de Gaulle is reported to have said that his country’s history began with his crowning. Clovis is also a forerunner of the most regal of French names: Louis.