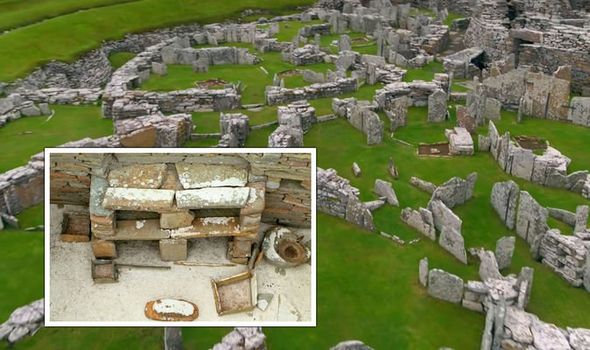 Duncansby Head lighthouse marks the most northeasterly point of the British mainland. It’s almost 880 miles from Land’s End in the southwest of England. Just beyond here are the Orkney islands, over 70 of them, many of which hold ancient secrets.

While 20 of the islands are inhabited, most of the population of about 22,000, live on the largest one known as the Mainland.

Orkney’s history goes back thousands of years ago — around 6,000, it is believed.

It was here that the people of the Neolithic era — the New Stone Age — settled on Orkney.

The remnants of their vibrant culture remain scattered across the archipelago and were explored during the Smithsonian Channel’s documentary, ‘Aerial Britain: Scotland‘.

Skara Brae on the Mainland’s west coast has attracted particular attraction, as the documentary’s narrator noted: “It’s a 5,000-year-old settlement that has been called the Scottish Pompeii.”

An incredible window into the lives of the ancient people who once lived there, it was only discovered in 1850 when a severe storm stripped the earth from the site.

Europe’s most complete Neolithic village, each house shares the same basic design — a single large room fitted with stone-built cupboards, dressers and beds, all laid out around a square hearth.

Here, the inhabitants would gather around the fire during Orkney’s long and dark winters.

The Broch of Gurness, also on the Mainland, is a later settlement dating from around 500 BC.

At its centre is a brooch or stone tower.

It would probably only originally have reached a height of around 30 feet and was most likely inhabited by the principal family or clan of the area.

The narrator said: “The entire settlement may have been home to as many as 40 families.”