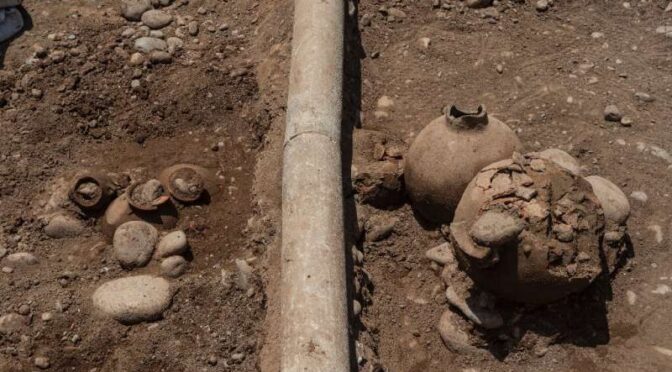 The AFP reports that workers laying a new gas pipe in the La Victoria district of the city of Lima discovered a 2,000-year-old grave containing some 40 ceramic vessels.

Workers laying gas pipes on a street in the Peruvian capital Lima stumbled on the remains of a pre-Hispanic gravesite that included 2,000-year-old ceramic burial vessels, an archaeologist said Thursday.

“This find that we see today is 2,000 years old,” archaeologist Cecilia Camargo told AFP at the site.

“So far, there are six human bodies that we have recovered, including children and adults, accompanied by a set of ceramic vessels that were expressly made to bury them.”

Experts believe the site in the Lima district of La Victoria may be linked to the culture known as “Blanco sobre Rojo,” or “White on Red,” which settled on the central coast of Peru in the valleys of Chillon, Rimac and Lurin, the three rivers that cross Lima.

“So far, we have recovered about 40 vessels of different shapes related to the White on Red style,” said Camargo, head of the cultural heritage department at the natural gas company Calidda.

“Some bottles are very distinctive of this period and style, which have a double spout and a bridge handle,” Camargo said.

As finds of ancient artefacts and remains occur frequently in Peru, all public service companies that do excavations have in house archaeologists, including Calidda, a Colombian-funded company that distributes natural gas in Lima and in the neighboring port of Callao.