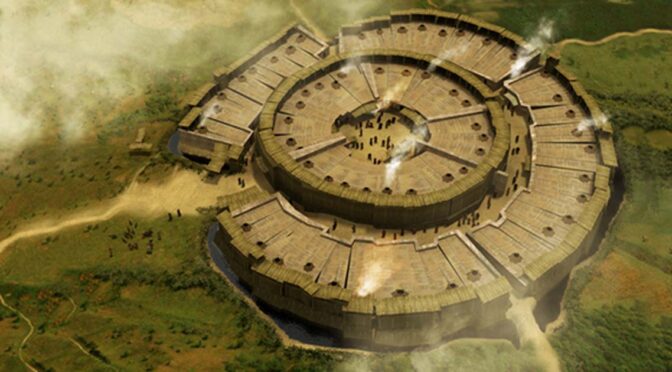 Arkaim: Stonehenge of Russia and its Unspeakable Secrets

Who in his life had never heard of Stonehenge? An enigmatic prehistoric monument north of the city of Salisbury, England, for more than 5,000 years, today it is a place that continues to develop speculation and theories beyond rationality.

The terrain was excavated, radiographed, measured and examined. Despite everything that has been learned about its age and construction, its purpose remains one of the world’s greatest mysteries.

It’s no secret, though, that Stonehenge isn’t the only megalithic circle of stones in the world. Some exist as collections of circles, such as the Senegambian circles in the Gambia, Senegal, which are considered a single circle on the world list but are actually made up of more than 1,000 to 15,000 individual monuments spread over a territory of 100 km wide and 350 km in length

There are many of these Neolithic sites in Britain, but they do not have a monopoly on the Henges. Some of the most interesting Neolithic monuments stand out within the borders of the former Soviet Union. Arkaim is one of those forgotten places, but they are an important part of the mysterious constructions.

Arkaim, beyond the history books

Some consider the Archaic to be the most important and enigmatic archaeological site in Northern Europe. This site is embroiled in controversy and is sometimes called Stonehenge, Russia. It is located on the outskirts of the Chelyabinsk region, south of the Urals, slightly north of the border with Kazakhstan.

According to experts, Arkaim is a remnant of an ancient settlement, which is essentially a village fortified by two large round stone walls. The enigmatic site covers an area of ​​about 20,000 square meters and consists of two house wheels separated by a street with a central square.

Discovered by a team of Russian archaeologists, causing a wave of excitement throughout the archaeological community. The site and its artefacts dating back to the 17th century. Pr. AD, and it is thought to have been built 4,000-5,000 years ago, which is interesting to attribute to the same age group as Stonehenge.

Arkaim has another name, it is called swastika in the city or, alternatively, the city of Mandala. It has this name for several reasons: first, if you use fantasy, the layout of the homes around the central square almost looks like a swastika. As we all know, the swastika is a sign of appropriation of the Nazi and so-called Aryan races and was adopted by modern groups of white chiefs.

The second reason is that they originated from the Sintashta culture, which is an Indian and Iranian race from the ancient Eurasian steppes or, more generally, an Aryan race. So there are those who argue that Archim is actually the birthplace of the higher white race. While few in basic science see any value in this reasoning, there are changes.

There are more interesting secrets on the site, such as linking it to a politically incorrect aspect of our culture. This was of great interest to archaeoastronomical, hence the reason for his connection with Stonehenge. Some experts said Stonehenge was built for astronomical observations. In fact, it is technically known as an observatory. This is because Stonehenge has allowed and may still allow the observation of 10 astronomical phenomena using 22 elements, and some argue that Archim allows the observation of 18 phenomena using 30 elements.

This basically means that certain events in the sky could be observed and followed by the area in certain ways and from different situations and that Arkaim offers more observable events than Stonehenge itself. In other words, it would seem that Arkaim is an even better astronomical observatory than its namesake. According to Russian archaeologist KK Bystrushkin, Stonehenge offers a 10-degree arc observation accuracy of one degree, and Arkaim offers a 1-minute arc accuracy. This precision is unheard of in the time allowed, descending from the ancient Greek Almagest, built 2,000 years later.

So it may seem obvious to some, but the fact that these places were built apparently deliberately to function as astronomical observatories and even as certain calendars until the same experience was achieved in the great founding empires like the Egyptians. and the Greeks are apparently strong evidence for attributing the further development and sophistication of these prehistoric cultures.

But apart from their history, it is interesting that Stonehenge and Archim are in the same latitude. However, “Arkaim” has also become a reference point for the UFO community, it is already customary to observe many UFOs, strange flashes of light in the sky or even some mysterious fog moving like an intellectual object.

But in addition to the well-known area, Archim also has a much more mysterious area where excavations are still taking place and visitors are not allowed. Even conspiracy theorists warn that not even the locals themselves fall into the mysterious area. Experts believe this theory is due to the energy flowing throughout the area, with unimaginable power that can make anyone lose their head.

There was a case where an archaeology student claimed to have heard a voice calling her from the centre of the building. She approached what happened next, only she knows. Over time, he said, he accepted the ghosts of the former inhabitants of Archim. Apparently, she reached another dimension and couldn’t stand it, she had to be admitted to a psychiatric centre. On closer analysis, curiously similar incidents occurred after the discovery of the Egyptian pyramids.

Because of all these mysterious phenomena over the centuries, the locals have always believed that it is a sacred place. An example can be found in the fact that pilgrims travel all year round to get healing water from the nearby river Bolshaya, and also used clay in the summer to treat various diseases.

Is our true origin hidden from us?

Mysterious structures such as Arkaim offer clues to the existence of an unknown or lost civilization in our distant past. Arkaim is just one example of rich archaeological gifts hidden deep in Russia. The country’s industrial progress has lost similar places, such as Sarkel, a limestone and brick fortress built by the Khazar culture in the 830s or 840s and flooded by the Russian government in 1952 due to the construction of the Tsimlyansk depository.

A similar aspect could be seen all over the world, but due to secrecy and the lack of cooperation between governments, or even to eradicate our origins, they have not yet been researched, analyzed, let alone discovered places that could decipher our true origins.