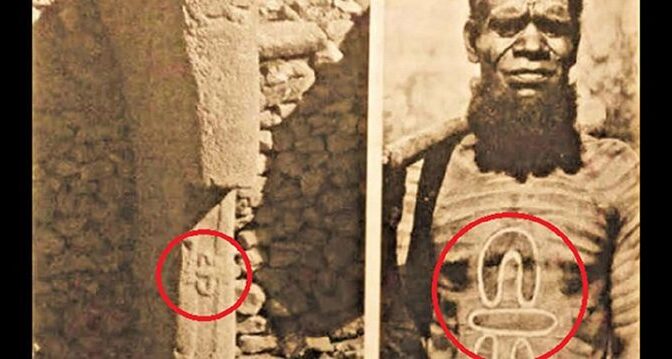 Australian Aboriginal symbols found on mysterious 12,000-year-old pillar in Turkey—a connection that could shake up history

Göbekli Tepe in Turkey is a 12,000-year-old megalithic monument complex, the origins of which have stumped archaeologists since its discovery about 20 years ago.

It has caused archaeologists to rethink their understanding of “primitive” society at that time.

The sophistication of a society that could build such monuments—containing pillars weighing 45 to 65 tons and carved with intricate symbols and figures—far surpasses what most archaeologists thought possible for that period.

It may have been created by a society that was wiped out by a cataclysmic event.

Carvings at the site may depict a comet that caused massive global climate shifts, a cataclysmic event that wiped out the civilization responsible for Göbekli Tepe.

Researchers at the University of Edinburgh published a paper to this effect last year in the journal Mediterranean Archaeology and Archaeometry.

From about 14,500 to 11,500 years ago, a period known as the Younger Dryas, the world experienced dramatic climate shifts.

The shift at the end of the Younger Dryas was particularly abrupt, according to the U.S. National Oceanic and Atmospheric Administration (NOAA).

Archaeologists have agreed that Göbekli Tepe is at least 12,000 years old, placing it within this period.

The site was rapidly buried about 1,000 years after its creation. Whether this was done intentionally by people or by nature is a matter of debate. Some have theorized that society wanted to protect the monuments from the cataclysm.

Fenton focused his cross-cultural analysis on Göbekli Tepe and the Arnhem Land area in northern Australia. He found many shared symbols and motifs.

For example, the lead photo of this article shows a symbol on a pillar at Göbekli Tepe, and the same symbol is painted on an Australian Aboriginal elder’s chest. This symbol is held by the Aborigines to depict two people sitting to share knowledge.

Fenton has found what he says are clearly Aboriginal churinga stones, sacred objects, at Göbekli Tepe.

On another pillar, Fenton has identified a symbol usually reserved for the most sacred artefacts of the Australian Aboriginal culture, churinga stones.

He has also found what he believes are churinga stones at other 12,000-year-old sites in Turkey thought to be connected to the Göbekli Tepe culture.

“Many of the animal symbols on the stones relate to Aboriginal clan totems,” Fenton said via email. He has also noticed similarities between the only female figure depicted at Göbekli Tepe and the Aboriginal depictions of Yingarna, the creator.

An ancient culture used Aboriginal shamanism to try and hold back the cataclysm at Göbekli Tepe, says Fenton.

Fenton hypothesizes that the Göbekli Tepe carvings display a characteristically Aboriginal shamanistic attempt to stop the coming cataclysm. He said, “The purpose of the complex was to reverse the flooding underway during the Younger Dryas, by placating the Rainbow Serpent (they assumed this water deity was responsible).”

In a paper on his theory, published in New Dawn magazine, Fenton wrote: “The images at Göbekli Tepe are mostly animals; it is tempting to think that this represented a significant effort by the shamans to call forth the spirits of the animals, many of which had become extinct.”