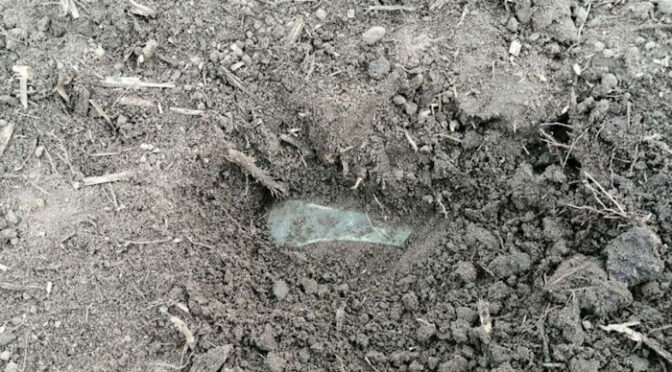 The Skalica district in Slovakia is a well-known archaeological site where scientists have previously unearthed many interesting ancient objects.

“According to archaeological discoveries Skalica, as part of the region Záhorie, was populated 3,500 years ago. The area’s development was conditioned by the flow of the River Moravia.

The territory on the left bank of the river became known as the Amber Road.

The Amber Road was an ancient route used for transferring amber from the costs of the North and Baltic Seas. This could be seen as a sign of the importance of this area since prehistoric times.

As regards its Slavic population, it presumably settled in this territory between the sixth and eighth century.” 1

The Skalica archaeological site needs an increase in its protection, and while conducting work at the site, scientists unearthed a rare axe from the Early Bronze Age.

The smaller axe is 9.5 cm long and has an enlarged fan-shaped cutting part, shallowly-grooved flat sides with hints of the side rails and a pointed tulle. It belongs to the so-called Saxon-type axe, the oldest specimens of which were still made of copper.

Similar axes were found in several locations in Slovakia, especially in Central Germany and Saxony. They are often part of a larger collection but also as individual objects as well,” the Slovak Spectator reports.

Recently, two other unique but accidental finds from older sections of the Bronze Age have been found in the Trnava region, both in the territory of Hlohovec. In 2017, a bronze blade from a so-called dagger on a club and in 2021 a short sword (long dagger).