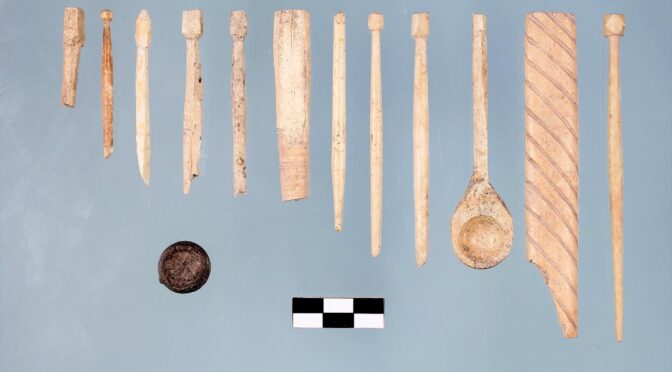 A bone workshop and an oil lamp shop have been unearthed in the ancient city of Aizanoi, located in the western province of Kütahya.

The excavations in Aizanoi, which is home to the best-preserved Zeus Temple in Anatolia and is also called the “Second Ephesus,” have been carried out by the Kütahya Museum Directorate.

Gökhan Coşkun, the excavation coordinator and head of the Kütahya Dumlupinar University’s Archaeology Department, told the state-run Anadolu Agency that they were working in areas that were never excavated before.

Coşkun said they carried out work in two different wings of the agora (a public open space used for assemblies and markets in ancient Greece) and reached important findings that would shed light on the trade and social life of the ancient city.

Stating that they were able to identify two of the uncovered shops, he said, “During the excavations, thousands of bone fragments were found inside one of the stores.

Most of them were bones of cattle. It is understood that some of these pieces were used as raw materials, and they were never processed, while some of them began to be processed, but they are half-worked and unfinished. Some pieces that were processed were turned into artworks.

As far as we understand, there was a local bone workshop in Aizanoi during the Roman period and was located in the agora. It served as both a workshop and a sales shop.

Among the processed bone artefacts were mostly women’s hairpins and spoons.”

He noted the second shop was selling oil and oil lamps, adding, “During the excavation of the other shop, we found many intact and broken oil lamps used as the lighting tools in the ancient period. We can see that most of these oil lamps were used.

This shows us that not only oil lamps were sold here, but also oil was poured into oil lamps and burned at that time.

Findings from both shops show us that local products were manufactured in Aizanoi. It is an important finding for us that important production activities were carried out in Aizanoi during the Roman era.”

With a history dating back to 5,000 years and situated 50 kilometres from the Kütahya city centre, Aizanoi was included in the UNESCO World Heritage Tentative List in 2012.