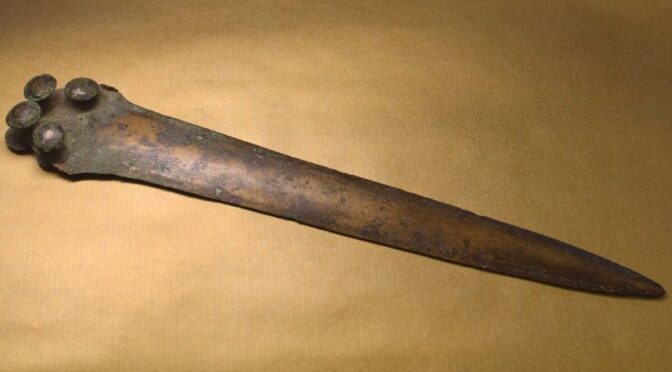 During their time off, relaxing by the River Váh, near Hlohovec, a local came across an object that they found interesting. Only when they returned home, did they discover that it was an archaeological find and paid a visit to the nearest museum?

Similar finds should be handed over to the regional offices of the Monuments Board of the Slovak Republic.

The local had discovered a short sword, or a long dagger, with a length of almost 26 cm and a weight of almost 150 g, the Trnava Office of the Monuments Board said. Its handle from organic material has not been preserved. Only traces of the rivets remained.

Similar short swords have been found in the Danube basin, stretching from southern Germany to the Vojvodina province in Serbia.

“They are typical for the emerging Tumulus culture, which began to dominate the central European region in the 16th century BC, that is during the Middle Bronze Age,” said Matúš Sládok from the Trnava Office.

In the past, a similar sword was discovered in Včelince, near Rimavská Sobota, where it was part of discovered bronze objects.

Long daggers from the Early and Middle Bronze Ages are often found in richly filled tombs, as part of mass discoveries, and often in rivers.

The sword found in the River Váh may have fallen into the water as part of the cult, but it may also be a lost object, Sládok said. The dagger’s owner could have lost it, for example, when wading the river, he added.

At the end of the Early Bronze Age, the first metal swords began to appear in Central Europe, as a separate invention that most likely evolved from long bronze daggers.

The sword from the Váh could serve as a very interesting developmental link between these two types of weapons, Sládok argued.

The sword is the fourth find from the River Váh in the Trnava Region since 2002, which has been reported and handed over, the year the Monuments Office of the Slovak Republic was established.

In the Váh, people have found a bronze blade from a dagger on a stick from the early Bronze Age, iron semi-finished products dating to the 2nd century BC – 2nd century AD, and a fragment of a millstone.