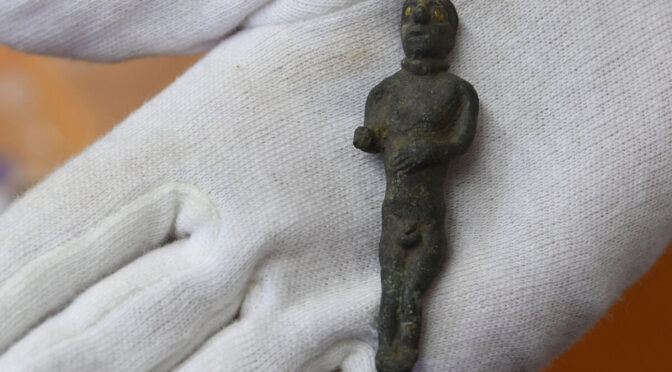 In the village of Jánovce, near Poprad, the Spiš Museum in Spišská Nová Ves has presented an important discovery: a Celtic bronze statue.

The museum conducted archaeological research in Jánovce in the location of Pod Hradiskom (Under the Hillfort) in spring and autumn of this year, explained archaeologist Mária Hudáková.

It is a locality known since the 19th century, but had not been systematically researched until now, she said.

The excavation works revealed more than 800 objects from different historical time periods, from prehistory to the modern era.

“These are mostly Celtic coins, bronze clips and other parts of clothing, products from clay, ceramics, wharves and glass beads and bracelets,” Mária Hudáková said, as quoted by the TASR.

The Celts were almost everywhere within the European borders. Their movements began during the Great Celtic Migrations that took place, in approximately around 500 BC and ended in c. 100 BC.

During these 400 years, the Celts, in seemingly endless waves, spread out throughout Europe and lived in large parts of Europe during the Bronze Age and Iron Age.

By 200 BC, the Celtic language was being spoken in the modern-day nations of Britain, France, Spain, Portugal, Germany, Austria, Switzerland, the Czech Republic, Poland, Slovakia, Bulgaria, Croatia, Italy, and, even to a lesser extent, Turkey.

Undoubtedly, the most precious find discovered in Jánovce is the bronze figurine of the man who is depicted naked but he wears a piece of jewellery in the form of a neckerchief.

The man’s golden eyes are another unique detail in this very realistic depiction.