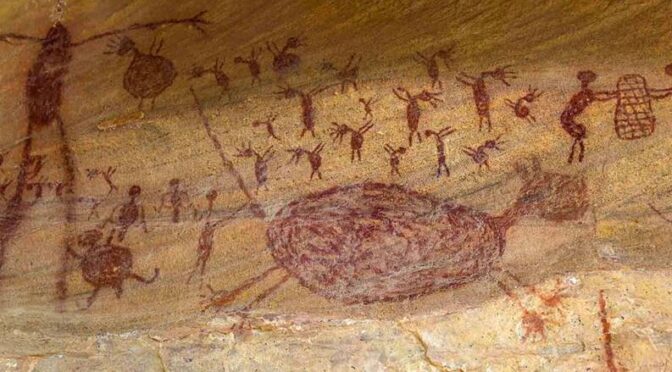 Exact Bone Dating by researchers in the Paris National Museum of Natural History. Details of the new date have been published in a paper in the scientific journal Antiquity of Cambridge University, where the research team places modern people far before the 20,000 years ago in the rock shelter of Santa Elina in Brazil.

Occupation of the site is dated to several different periods, suggesting that groups of hunter-gatherers only dwelt at the site when climate favoured hunting in the region. The irregular periods of occupation spread across the Late Pleistocene and Late Holocene.

For many years now teams of archaeologists investigating ancient human occupations sites across Brazil have produced evidence of extremely early colonisation of this part of South America.

The earliest dates associated with Brazilian archaeological research are close to 60,000 years ago. However such extreme figures for colonisation remain highly controversial.

Excavations carried out at the Santa Elina rock shelter between 1984 and 2004 explored three sediment layers containing the remains of hearths, stone artefacts and bones associated with the extinct giant sloth species Glossotherium.

Several of the bony plates from the sloth skin had been converted into ornaments of some kind by the resident humans, the added notches and holes may have allowed these plates to be worn on the body.

Scientists utilised three separate dating methods to investigate samples of charcoal, sediment and the sloth bones. The revealed dates securely place people at the Santa Elina site well over 23,120 years ago. Humans groups abandoned the site after a short period, but later groups utilised the rock shelter again between 10,120 to 2,000 years ago.

The new dates from Santa Elina further erode the consensus understanding that the first modern humans, known as the Clovis people, reached the Americas by walking across a land bridge between Northeast Asia and North America just 13,000 years ago.

In recent years a steady series of archaeological finds have caused a growing number of archaeologists to abandon the ‘Clovis first’ colonisation model.

The evidence of hunter-gatherers living in the Santa Elina rock shelter 23,120 years ago is highly problematic for scientists that still believe humans reached the Americas by walking into North America – the rock shelter is over 12,000 kilometres from the proposed entry site.

Not only is Santa Elina far from the earliest Clovis sites, but it is also over 2000km from the coast in a heavily forested region.

These facts call into question the way in which the American continent was colonised as it is logical to suspect that humans lived along the coastline long before making the arduous journey into the Brazilian interior 23,120 years ago.

A growing number of researchers suspect that the first settlers used canoes to colonise the Americas and perhaps drifted down the Pacific Coast in simple watercraft before heading inland.

Some South American sites once occupied by Stone Age people are closer to the Atlantic coast, raising the possibility of the first colonisation involving a movement of people from Africa. 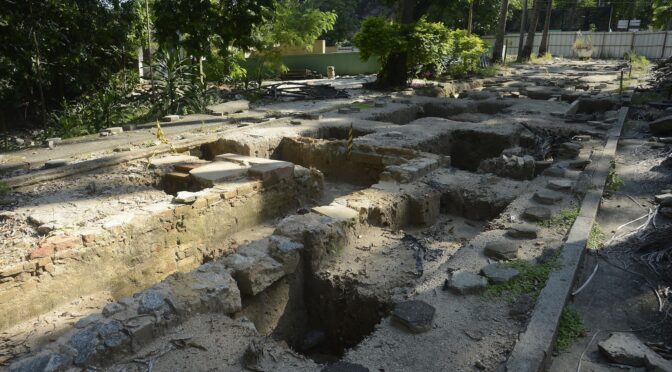 While working to renovate Rio de Janeiro’s zoo, workers found historical artifacts dating back to Brazil’s imperial past at the Quinta da Boa Vista park, in the northern part of the city.

Classified as an ‘archaeological treasure’ by Rio’s city government, the more than 30,000 items found are believed to be from the beginning of the 19th century to the first years of the 20th century.

Among the items found are plates, cutlery, pieces of clothes and uniforms with the imperial insignia and other belongings of employees of the Imperial Family.

“We believe that many objects were donated by the palace to the residents of the surrounding area. It (donations) worked as sort of a good neighbor policy,” says archaeologist Filipe André Coelho.

According to Coelho, that region was a village of officials, free and enslaved workers, as well as military personnel.

“We discovered a more noble pottery that has paintings, which was not common among the poorest population,” explains the archaeologist.

The area, which today houses the RioZoo and the National Museum, was where the Portuguese Royal Family resided, during the reigns of Pedro I and Pedro II. The empire lasted from 1822 to 1889.

The RioZoo has been under renovation since June of last year, and is partially open to visitation.

Its reinaguration is expected to take place in January of 2020. According to officials, part of the objects will be exhibited at the new zoo.

Most of the artifacts, however, will be integrated into the collection at the National Museum, being rebuilt after the devastating September 2018 fire.

According to the city the archaeological site will be preserved and opened for visitation as soon as the archeologists have concluded their work.