The Ministry of Heritage and Tourism has announced the discovery of archaeological artefacts at Dibba site in Musandam Governorate, dating back to the first millennium BC, most notably incense burners, bronze axes, and utensils made of copper and steatite.

The Ministry of Heritage and Tourism, in cooperation with an archaeological mission from the Italian Sapienza University, announced the discovery of a number of artefacts at the Dibba site in the Musandam Governorate, dating back to the first millennium BC.

Work is underway for the seventh and final season of excavations in the mass grave CG2, which is 24 metres long and more than 3 metres deep.

A number of important artefacts have been uncovered, most notably a censer, bronze axes, and utensils made of copper and steatite.

These recent excavations come as a prelude to the establishment of the visitor centre, which will start implementation soon, in cooperation with OQ Company, and it will be the first of its kind in the Sultanate of Oman and the Gulf Cooperation Council countries.

It will be built directly above the archaeological evidence. The centre will include a museum displaying the artefacts discovered at the site.

It is noteworthy that this site is considered one of the most important archaeological sites in Oman and dates back to the first millennium BC, when it was a trading centre associated with neighbouring civilisations in India, Persia and Mesopotamia.

Many diverse and precious collectables, locally made and imported from neighbouring civilisations, were found in it. 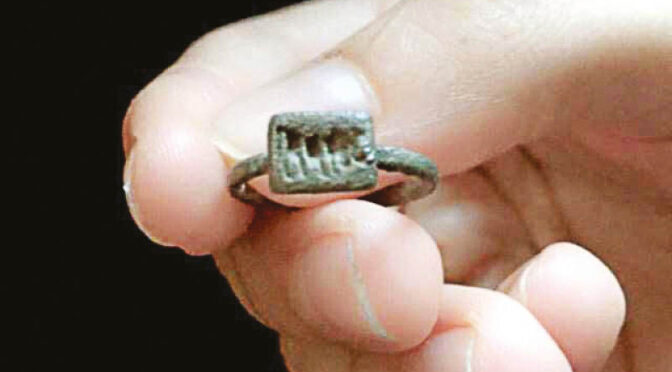 From a prehistoric grave dating to the 3rd millennium BC in Dahwa, North Batinah, a team of international archaeologists working under the auspices of the Oman Ministry of Heritage and Tourism have unearthed an extraordinary collection of silver jewellery.

The collection includes parts of necklaces with beads and several rings.

One of the silver rings, interestingly, bore a stamp depicting an Indian bison (Bos Gaurus), a defining symbol of the Indus Valley (or Harappa) Culture that suggested the merchants were engaged in interregional trade.

Although quite common on Indus-related circular stone seals in Iran, Bahrain, Mesopotamia, and Oman, this image was relatively uncommon in the Indus Valley.

In fact, it was discovered engraved on stamp seals made from local soft stone in Oman at Salut and Al-Moyassar. This is, however, the first time this image has been discovered on a metal finger ring.

According to professor Jonathan Mark Kenoyer, an expert on ancient technologies from the University of Wisconsin-Madison, US, seal rings are typical of much later periods.

“But this discovery confirms that Bronze Age peoples were much more ingenious and technically advanced than previously thought. They introduced at a very early stage administrative solutions that allowed economic growth in the later millennia.”

What makes the find even more intriguing is the fact that the jewelry found is made of silver that most likely came from Anatolia (Turkey). 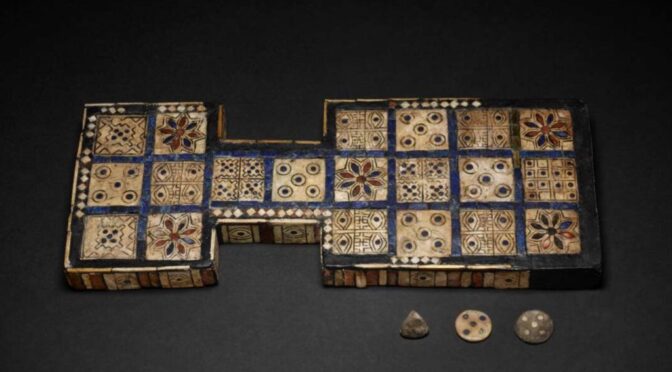 Archaeologists in Oman have found a 4,000-year-old stone board game at a Bronze and Iron Age settlement site near the village of Ayn Bani Saidah in the northern Hajar mountains’ Qumayrah Valley.

“Such finds are rare, but examples are known from an area stretching from India, through Mesopotamia even to the Eastern Mediterranean,” Piotr Bielinski, a University of Warsaw archaeologist who co-led the excavations, said in a statement.

“The most famous example of a game board based on a similar principle is the one from the graves from Ur,” an ancient royal cemetery in Iraq.

The ancient game he is referring to was discovered in 1922, is about 4,500 years old and is a two-player game similar to backgammon. It is now in the collection of the British Museum in London.

The newly discovered large stone board in Oman had grid-like markings seemingly indicating different fields of play, as well as cup holes. Its rules have been lost to time.

An Omani-Polish team from the University of Warsaw’s Polish Centre of Mediterranean Archaeology and Oman’s Ministry of Heritage and Tourism has been conducting the fieldwork, led by Bielinski and the ministry director-general of antiquities Sultan Al Bakri.

The area surrounding the dig is one of the least-studied regions of Oman—but finds made by recent studies suggest the Qumayrah Valley was part of a major trade route between several Arab cities.

“This abundance of settlement traces proves that this valley was an important spot in Oman’s prehistory,” Bieliński told the Daily Mail.

Digs at the site, which has been the subject of excavations since 2015, have also yielded four towers—one at least 60 feet tall—and the first evidence of copper smelting in the region.

“This shows that our settlement participated in the lucrative copper trade for which Oman was famous at that time,” Bielinski said in a statement.

Plans are to continue excavations near Ayn Bani Sa’dah, as well as to investigate the other end of the valley, near Bilt. 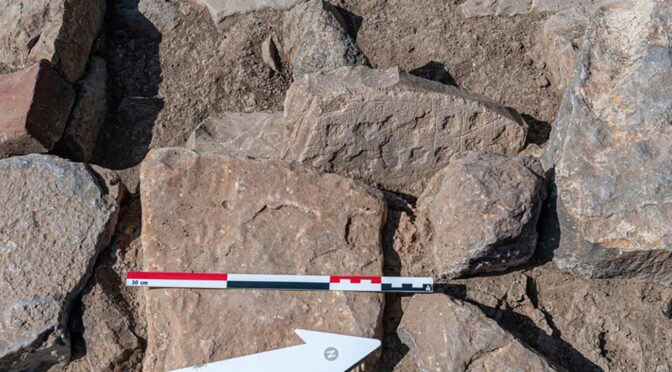 An Old Classic Bronze Age board game ‘played 4,000 years ago’ uncovered in the Oman desert

While innovative and artistic board games may hold our attention today, settlers four millennia ago in the Arabian Peninsula whiled away the time on a stone board game.

Last month, archaeologists discovered a stone slab carved with a grid and cup holes to hold game pieces at a prehistoric settlement in the Qumayrah Valley, located in modern-day Oman, reports Samuel Kutty for the Oman Daily Observer.

The team, led by Piotr Bieliński of the Polish Centre of Mediterranean Archaeology and Sultan al-Bakri, Oman’s director-general of antiquities, found the large stone board in a structure near the village of Ayn Bani Saidah.

In a statement, Bieliński said that similar kinds of games have been found in “areas stretching from India, through Mesopotamia even to the eastern Mediterranean.” She cited, as an example, one of the earliest-known game boards found in the ancient Mesopotamian city of Ur’s royal cemetery in 1922, dated around 4,500 years ago. Known today as the Royal Game of Ur, the two-player strategy game was similar to backgammon.

Board games have been played across the world for thousands of years. In Jerusalem, bored Roman soldiers were believed to have carved a grid for a board game on the steps of the Damascus Gate some 1,800 years ago, possibly an early form of modern-day checkers, as reported by Ruth Schuster for the Jerusalem Post in November.

The stone board game in Oman was just one of several discoveries made at the excavation site, reports Ashley Cowie for Ancient Origins.

Archaeologists also unearthed the remains of stone towers—one of which is believed to have been 60 feet tall—and evidence of copper production all dated to the Bronze Age, from 3200 to 1200 B.C.E.

“The settlement is exceptional for including at least four towers: three round ones and an angular one,” says Agnieszka Pieńkowska of the Polish Center, who is analyzing the site’s artefacts and stone structures.

Researchers at Ayn Bani Saidah dated the settlement to the Umm an-Nar period, between 2600 to 2000 B.C.E. They discovered several copper items and smelting remains at the site, indicating the site was involved in the early copper trade, reports the Jerusalem Post.

“This shows that our settlement participated in the lucrative copper trade for which Oman was famous at that time, with mentions of Omani copper present in the cuneiform texts from Mesopotamia,” says Bieliński in the statement.

The team also found evidence that the region remained an important trade and production site through the second phase of the Iron Age, dating from 1100 to 600 B.C.E.

Per the Oman Observer, the Qumayrah Valley has yielded many archaeological finds, likely due to serving as a major trade route between several Arab cities.

“This abundance of settlement traces proves that this valley was an important spot in Oman’s prehistory,” Bieliński tells Ian Randall of the Daily Mail. “Ayn Bani Sadah is strategically located at a junction of [trade] routes.”

The team plans to continue its excavations this year, focusing on areas surrounding the settlement and other parts of the Qumayrah Valley. 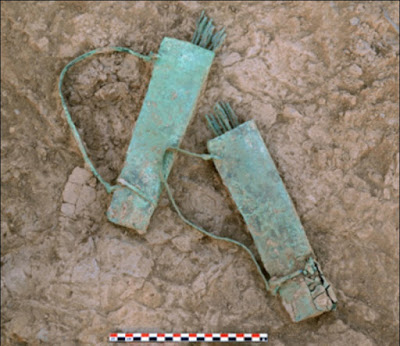 In the Arabian Peninsula, an impressive hoard of bronze weapons dating back nearly 3,000 years has been discovered. Bows, arrows, daggers, and axes were discovered strewn around the ruins of what is thought to be an ancient religious building.

Are these all replicas? They are intriguing because they are crafted from metal and considered sacred in some people’s cultures, as a possible offering to a god of war.

They were found inside the ruins of an Iron Age building first discovered in 2009 near Adam, in the Sultanate of Oman.

Experts believe the weapons, which date from 900 to 600 BC, were once displayed on shelves, furniture, or hung on walls before they fell off and were discovered alongside ritualistic objects. Two collections of items are of particular interest to archaeologists – small quivers entirely made of bronze, each containing six arrows and other metal weapons.

They measure 14 inches (35cm) tall, making them small-scale replicas of the real objects, which would have been made of leather and are not usually found in archaeological excavations as they degrade over time.

The fact the quivers are made of metal supports the idea they were ornamental objects, rather than of practical use. Quivers of this kind have never been found in the Arabian Peninsula and the Middle East, and are extremely rare elsewhere.

Experts are also intrigued by other metal weapons, which were also mostly non-utilitarian given their slightly reduced size, material, or unfinished state.

They include five battle-axes, five daggers with crescent-shaped pommels characteristic of the Iron Age, around 50 arrowheads, and five complete bows.

The bows are made up of a flat, curved stave bent at both ends which are connected by a string made of bronze. The size of the bows – 28 inches (70cm) on average – and above all the material used, shows that they were imitations of the real things made of perishable materials such as wood and tendons.

French archaeologists first discovered the site near Adam, which was completely unexplored from an archaeological point of view until the French mission headed by Dr. Guillaume Gernez, of Pantheon-Sorbonne University, began in 2011.

The site is known as Mudhmar East and consists of two main buildings located near one of the largest valleys in Oman which lay at the crossroads of several trade routes.

With a length of 49 feet (15 meters) the larger of the two buildings is located on the slope of Jabal Mudhmar and is made of cut sandstone blocks and earth bricks.

It is in this building, in a small, apparently doorless room, Dr. Gernez uncovered the bronze weapons.

‘This exceptional discovery provides new information about weaponry during the Iron Age in the eastern Arabian Peninsula and about social practices at the time,’ he said.

‘The non-utilitarian nature of most of the weapons may indicate that they were designed to be offered to a deity of war, and/or as a key element in social practices not yet understood.

‘The first hypothesis is reinforced by the presence in the site’s second building of several fragments of ceramic incense burners and small bronze snakes, objects often associated with ritual practices at that time.’

He said the cache of weapons was made at a time when metallurgical production was on the rise in the eastern Arabian Peninsula during the Iron Age.

‘This economic and technical development went hand-in-hand with an increasingly complex society, as shown by the proliferation of fortified sites and monumental architecture,’ he explained.

‘However, understanding the political system and social structure of this pre-literate society remains a difficult task.

‘Continued archaeological exploration of the site and its immediate surroundings, as well as of the central region of Oman, will be key to reconstructing the dawn of history in the Arabian Peninsula.’