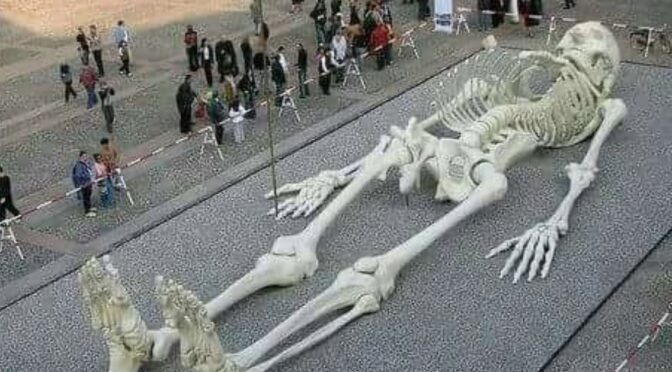 When coal miners at Moberly, Missouri were drilling a shaft 360 foot deep, broke into a cavern revealing “a wonderful buried city,” multiple sources reported in 1885.

Masonry and artefacts in extraordinary rude design have been found. Like stone tables, bronze and flint knives, stone and granite hammers, metal statues, metallic saws and a stone fountain that flowed with “perfectly pure water”, which was found to be impregnated with lime.

“Lying beside the fountain where portions of a human being and from the measurement of the bones, it concluded that when alive the figure was three times the size of an ordinary man and possessed of wonderful muscular power and quickness. “, according to the St Paul Daily Globe.

The Semi-Weekly South Kentuckian published the measurements of the giant’s leg, “The bones of the leg were measured, the femur measuring 4 and 1/2 feet, the tibia four feet and three inches. The head bones had separated in two pieces, the sagittal and cornal suturis having been destroyed”

The city was arched in by a hard and thick stratum of lava. The civilization used a regularly laid out road system enclosed by walls to travel around. A hall was discovered wherein were stone benches, tools of all descriptions for mechanical service.

The searching party spent twelve hours in the depths and only gave up explorations because of the oil in their lamps being low. No end to the wonderful discovery was reached.

The statues were not accurately made as those made by the mechanics in the year 1885, however, they demonstrated much skill and evidence of an advanced civilization.

The facts above are vouched for by Mr David Coates, the recorder of the city of Moberly, and Mr George Kealing, City Marshall, who were of the exploring party.

I could find no record of the 2nd exploration. Perhaps in the historic papers on film, in the town of Moberly, information may still exist.

In an odd coincidence the terms “cave + Missouri”, “Missouri + cave + coal mine”, “Missouri cave fountain”, “Missouri gaint” and countless other rational terms would not locate these articles on the library of congress website.

It seems you need to be clever in your search terms in order to locate historical articles that are relevant.