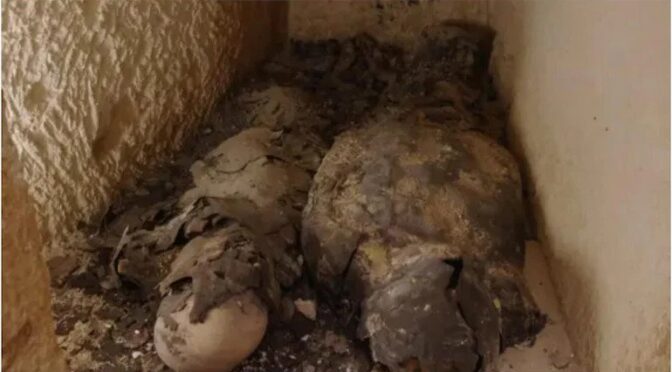 The mystery behind Egyptian queen Cleopatra’s tomb is immense because nobody appears to know where she was buried. However, archaeologists in Egypt are in all probability, close to cracking the code with respect to Cleopatra’s burial after two mummies of high-status individuals, who lived in her era, have been discovered at Taposiris Magna – a temple on the Nile delta.

A discovery that it is being described as “sensational” because it shows the importance of a necropolis that is being linked to her by the latest finds.

Although the burial chamber had been undisturbed for 2,000 years, the mummies are in a poor state of preservation because water had seeped through.

But crucial evidence reveals they were originally completely covered with gold leaf, a luxury afforded only to those from the top tiers of society. Perhaps these two individuals had interacted with Cleopatra herself, archaeologists suggest.

The opening of the first-ever intact tomb found at Taposiris Magna was witnessed by cameras for a new Channel 5 documentary, The Hunt for Cleopatra’s Tomb, to be screened.

It is presented by Dr Glenn Godenho, a senior lecturer in Egyptology at Liverpool University, who described the discovery as phenomenal.

The mummies have been X-rayed, establishing that they are male and female. One suggestion is they were priests who played a key role in maintaining the pharaohs’ power. One bears an image of a scarab, symbolising rebirth, painted in gold leaf.

Cleopatra was the last of a ruthless dynasty that ruled the Ptolemaic kingdom in Egypt for almost three centuries. Yet not a single Ptolemaic pharaoh’s tomb has been found.

Excavations at Taposiris Magna are headed by Dr Kathleen Martínez, who, after working there for over 14 years, is more convinced than ever Cleopatra’s tomb will be found there. Only a tiny percentage of the vast site has been explored.

In the show, cameras film her as the burial chamber with two mummies is opened up for the first time. After an initial limestone slab is removed with a chisel and hammer, she peers through a small hole, exclaiming: “Oh my god, there are two mummies … See this wonder.”

Her previous discoveries include a headless statue of a pharaoh, believed to be King Ptolemy IV, Cleopatra’s ancestor, and a foundation plate with an inscription showing that the temple was dedicated to the goddess Isis. Cleopatra saw herself as the “human incarnation of Isis”, Martínez said.

At the site of the temple altar, where priests would have made offerings to the gods, 200 coins bearing Cleopatra’s name and her face have been discovered.

This “incredible find” not only links Cleopatra directly to Taposiris Magna but also reveals a striking image of the queen, Godenho says in the documentary.

While its prominent nose and double chin may not suggest the classical beauty immortalised by Hollywood and Elizabeth Taylor, it is how she would have wanted to be seen as the coins would have been pressed using her direct instructions.