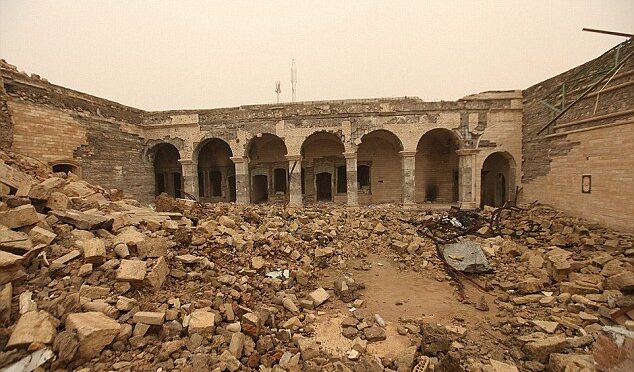 The 2,600-Year-old palace is found buried under the ruins of a shrine blown up by Isis in Mosul

Archaeologists assessing the damage caused by Islamic State militants to the tomb of the prophet of Jonah have made a surprise discovery. Experts found a previously untouched palace dating back to 600BC buried under the ruins of Jonah’s desecrated resting place.

The Nebi Yunus shrine – containing what Muslims and Christians believe to be the tomb of Jonah or ‘Yunnus’ as he is known in the Koran – was destroyed by ISIS militants in July 2014.

Weeks after overrunning Mosul and much of Iraq’s Sunni Arab heartland, ISIS militants rigged the shrine and blew it up, sparking global outrage.  ISIS militants believe giving special veneration to tombs and relics is against the teachings of Islam.

The shrine holding Jonah’s tomb is located on top of a hill in eastern Mosul, a city in northern Iraq with a population of around 660,000 that was retaken from ISIS control by Iraqi army forces last month.

Archaeologists have been picking through ancient rubble left behind by the terror group as they attempt to salvage surviving artefacts. They told the Telegraph that ISIS dug tunnels deep under the shrine and into a previously undiscovered and untouched palace dating back to 600BC. These tunnels were not professionally built, leaving them unstable and at risk of collapse within the next few weeks, burying the ancient palace.

‘We fear it could all collapse at any time,’ entombing the treasures, said archaeologist Layla Salih, who is in charge of antiquities for the Nineveh province where the shrine stands.

‘There are cave-ins in the tunnels every day.’

It had long been rumoured that the shrine shared a site with an ancient palace.  Excavations had previously been carried out by the Ottoman governor of Mosul in 1852. The Iraqi Department of antiques also studied the site in the 1950s.

But neither excavation had dug as far as the ISIS militants, leaving the palace undiscovered for 2,600 years. The finding is the first example of ISIS militants tunnelling underneath historic sites to find artefacts to loot. Within one of the ISIS tunnels, archaeologists found a marble inscription of King Esarhaddon, thought to date back to the Assyrian empire in 672BC.

The palace was renovated and expanded by King Esarhaddon after it was built for his father Sennacherib. It was partly destroyed during a ransacking as part of the Battle of Nineveh in 612 BC.

Only a handful of these ‘cuneiform’ slabs have ever been uncovered from the Esarhaddon period. Archaeologists also unearthed two Assyrian empire-era winged bull sculptures within the Jihadist tunnels.

Two murals in white marble show the winged bulls with only the sides and feet showing.  In another section of ISIS tunnel, the archaeologists found Assyrian stone sculptures of a demi-goddess, pictured spreading the ‘water of life’ to protect humans.

Mrs Salih said that some of the larger sculptures were likely left behind by ISIS because they feared the hill might collapse. Other removable artefacts, especially pottery, were certainly plundered, she said.

‘I’ve never seen something like this in stone at this large size,’ Professor Eleanor Robson, chair of the British Institute for the Study of Iraq, told The Telegraph.

Professor Robson suggested they may have been used to decorate the women’s quarter of the palace. The objects don’t match descriptions of what we thought was down there, so Isis’s destruction has actually led us to a fantastic find.’

‘There’s a huge amount of history down there, not just ornamental stones.  It is an opportunity to finally map the treasure-house of the world’s first great empire, from the period of its greatest success.’

Mrs Salih, who is leading the five-person team carrying out the emergency documentation of Jonah’s tomb, believes that ISIS forces looted hundreds of objects before Mosul was retaken by Iraqi forces.

‘I can only imagine how much Daesh discovered down there before we got here,’ she said.

‘We believe they took many of the artefacts, such as pottery and smaller pieces, away to sell. But what they left will be studied and will add a lot to our knowledge of the period.’

As the city of Mosul was finally retaken, Iraqi forces battling Islamic State unveiled the destruction left behind by the jihadis last month in a series of devastating photographs. The terrorist group who levelled many of the city’s most well-known Muslim artefacts and buildings.

‘We retook control of Nabi Yunus area… raised the Iraqi flag above the tomb,’ said Sabah al-Noman, spokesman for the Counter-Terrorism Service spearheading the Mosul offensive. The destruction of all bridges over the river in airstrikes has made it difficult for IS fighters in east Mosul to resupply or escape to the west bank, which they still fully control.

The western side of Mosul, which is home to the old city and some of the jihadists’ traditional bastions, was always tipped as likely to offer the most resistance.