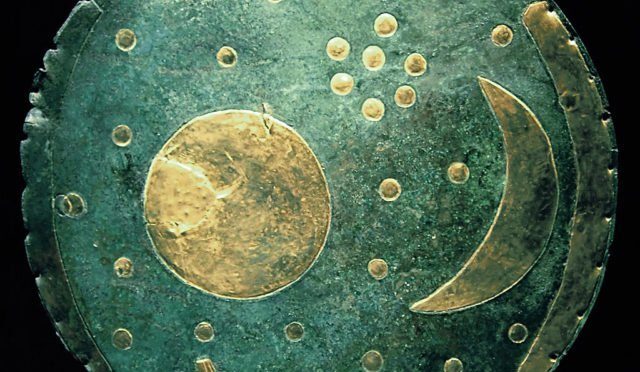 Dated to c. 1600 BC, the Nebra sky disk is one of the most important archaeological finds in the 20th century

In the eastern German town of Halle, the 3,600-year-old Sky Disk of Nebra, the world’s oldest image of the cosmos, is the centerpiece of Europe’s greatest Bronze Age exhibition. When it was brought to the German public’s notice in 2002, having been found in the state of Saxony-Anhalt two years earlier, it caused a worldwide sensation.

Now the Sky Disc of Nebra — a bronze disc with gold-leaf appliques representing the sun, moon, stars, and a ship — is back in the limelight, at the opening of a blockbuster show entitled “The Forged Sky: The Wide World in the Heart of Europe 3,600 Years Ago.”

For the first time the disc, which is around 32 centimeters (12 inches) in diameter and weighs about 2 kilos (1 pound), will be on public view in its fully restored state.

In addition to the oldest concrete representation of the cosmos known to date, the Forged Sky exhibit, at the State Museum of Prehistory in the town of Halle, will feature the Sun Chariot of Trundholm (Denmark) and 1,600 more of the most important archeological finds representing Europe in the Bronze Age.

When it was discovered, the Sky Disc was considered a key find not only for archaeology but also for astronomy and the history of religion. Deposited some 3,600 years ago, it was found on the summit of the Mittelberg hill, near the wooded area of Nebra in eastern Germany, together with valuable swords, jewelry, and tools.

The find initiated a new presentation of the Bronze Age world in Central Germany. The natural riches of this region — copper, salt, and fertile soils — formed the power basis for the resident Early Bronze Age princes, who exchanged goods from all regions of Europe. Mighty tombs, extensive bronze treasures, gold jewelry, and unique display weapons survive as their status symbols, and a representative sample of them is pulled together for the current blockbuster show.

“Peoples’ interest in the disc since it was unearthed two years ago has not let up,” Saxony-Anhalt state archeologist Harald Meller told the DPA news agency. He explained: “We put the show together in record time, 18 months.”

Meller said he expects 100,000 people to visit the exhibit. If there is enough interest, he said, the show will be extended. The objects on view have been donated by 68 museums in 18 countries.

“Most of the objects, like burial offerings, cult objects, gold jewelry, and various decorated armaments, have never before been out on loan, and they will only be gathered together like this for the show in Halle,” Meller told DPA. Aside from European countries, Lebanon also loaned some pieces to the show.

For example, the organizers got special permission to borrow the 3,400-year-old Sun Chariot of Trundholm from its home at the National Museum in Copenhagen, for the duration of the Halle show.

The National Museum had previously decided that, for security reasons, the 50 centimeters long, 30 centimeters high Sun Chariot should never again leave Denmark. Similarly, the 88 super thin golden ships from Nors, Denmark, are so brittle that they hardly ever leave the National Museum, according to museum director Flemming Kaul.

But having a group of artifacts from around Europe is important, because “We show that … there is a long process of developing knowledge about religion and astronomy in Europe, which is part of the history of mankind,” Meller said.

The disc itself was a cult object and describes the world view during the Bronze Age. People imagined the earth as a disc, with a dome-shaped sky covering it. A cluster of seven dots has been interpreted as the Pleiades constellation as it appeared 3,600 years ago.

At the same time, the piece is thought to be related to primitive observatories, one of which is the “German Stonehenge” in the nearby town of Goseck.

Archeologists believe the disc may have been used in the pre-calendar Bronze Age as an instrument for determining seasonal changes.

The popularity of the disc has led to a boom in reproductions. Demand for €800 ($990) copies of the disc is booming: “There are already 50 on order, and the fabricator can barely keep up with production,” Meller said.

On the other hand, the disc’s popularity can’t stanch the flood of lawsuits that followed its discovery. Although the copyright case was decided in favor of the state of Saxony-Anhalt, there is still a suit before the Halle appeals courts against two suspected fencers from North-Rhine Westphalia who claim the Sky Disc is a fake that was found outside of Germany.

The disc was found on July 4, 1999, by two convicted grave robbers. In February 2002 it was bought along with other Bronze objects from art fencers in a police operation in Switzerland.