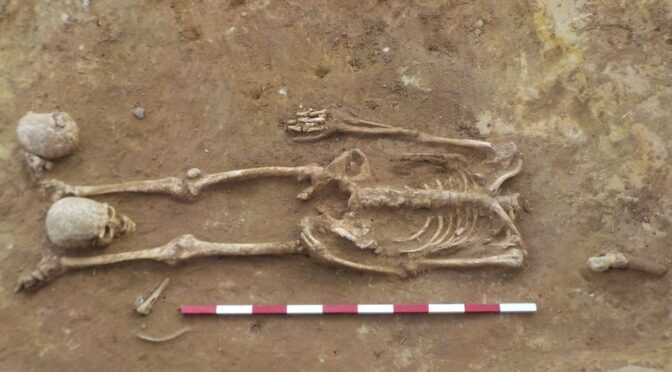 Decapitated Skeletons, with Heads Between Their Legs, Unearthed in Roman Cemetery

Archaeologists discovered that a third of the skeletons were decapitated at a fourth-century Roman grave site in England, an unusually high percentage, even for the Roman Empire.

Out of the 52 skeletons archaeologists have identified in Suffolk county’s Great Whelnetham village, 17 are decapitated with their head placed between their legs. These beheadings occurred after the people had already died—meaning that none of them was executed in this fashion.

“This appears to be a careful funeral rite that may be associated with a particular group within the local population, possibly associated with a belief system (cult) or a practice that came with a group moved into the area,” Peachey said.

The 17 beheaded skeletons are male and female, with one belonging to a child around nine or ten years old.

Most of the 52 skeletons in the graveyard are middle-aged or older. They show signs of poor dental hygiene but were well-nourished. Some of them had tuberculosis.

The reason archaeologists examined the site in the first place is that there is a planned housing development there. In Europe, archaeological discoveries are often made in preparation for public works projects.

That’s how researchers found a pair of medieval thigh-high boots in the mud of the River Thames, an ancient Roman library in Germany and a motley collection of artefacts in the city of Rome.

Archaeologists are still studying the skeletons in Great Whelnetham and will publish a report on their findings when they have finished. Until then, it’s difficult to speculate on why these 17 skeletons were singled out for beheading rites; previous examples of Roman beheadings don’t necessarily shed light on the reason these skeletons were decapitated.

In the city of York, England, there’s a second- and third-century Roman grave site where most of the 80-some skeletons were decapitated. Researchers found that these decapitated people migrated to York from as far away as modern-day Syria or Palestine.

But unlike the Great Whelnetham skeletons, the decapitated skeletons of York were all men whose remains suggest they were gladiators or soldiers. For some of them, decapitation probably was the way they died.

The skeletons at Great Whelnetham seem to have met a gentler fate.