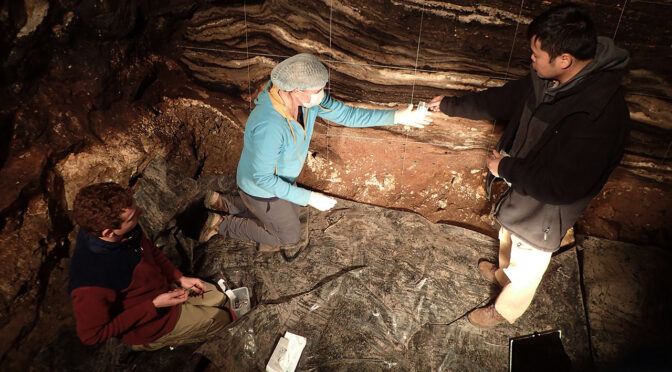 Science Magazine reports that analysis of more than 700 soil samples from Siberia’s Denisova Cave has detected traces of modern human DNA, which suggests that modern humans may have occupied the cave alongside Denisovans and Neanderthals.

The group was named “Denisovans” in its honour. Now, an extensive analysis of DNA in the cave’s soils reveals it also hosted modern humans—who arrived early enough that they may have once lived there alongside Denisovans and Neanderthals.

The new study “gives [researchers] unprecedented insight into the past,” says Mikkel Winther Pedersen, a molecular paleoecologist at the University of Copenhagen who was not involved with the work. “It literally shows what [before] they have only been able to hypothesize.”

Humans—including Neanderthals and Denisovans—are known to have occupied Denisova Cave for at least 300,000 years.

Among the eight human fossils unearthed there are the pinkie, three bones from Neanderthals, and even one from a child with one Neanderthal and one Denisovan parent.

The cave also contains sophisticated stone tools and jewellery at higher, later levels. But no modern human fossils have been found there.

Those artefacts, extensive studies of DNA from these bones, and even one early study of DNA from soils have cemented the cave’s importance for piecing together human evolution.

But eight fossils are not much to go on, so Elena Zavala, a graduate student at the Max Planck Institute for Evolutionary Anthropology, and colleagues teamed up with Russian researchers to see what kind of DNA was present in the soils of the three-chamber cave (see the video, below).

Researchers have been studying DNA isolated from soils for more than 40 years, including sequencing DNA from permafrost, but only in the past 4 years has anyone found DNA from extinct humans in ancient soils.

Working with another team of experts who had previously dated the layers of the cave, the researchers dug out 728 soil samples. After 2 years of analysis, in which they isolated and sequenced the samples, the researchers found human DNA in 175 of them. That makes the study “the largest and most systematic of its kind,” says Katerina Douka, an archaeological scientist at the Max Planck Institute for the Science of Human History who was not involved in the work.

The data reveal a complex history of human and animal habitation, with different groups moving in and out of the cave over time, Zavala and her colleagues report today in Nature. Their work confirms that Denisovans were the cave’s first human inhabitants, about 300,000 years ago.

The last to arrive were modern humans, who showed up about 45,000 years ago. The soil layer that corresponds with that period contained DNA from all three human groups, the researchers report.

“The time periods [of each layer] are quite large, so we can’t concretely say if they overlapped or not,” Zavala says. But, Douka adds, “I cannot think of another site where three human species lived through time.”

Given the jewellery and sophisticated artefacts in later layers, some researchers had suspected moderns had been there. But no one knew they had arrived as early as 45,000 years ago—and overlapped with both of our archaic cousins.

“It suggests a more complicated interplay between archaic and modern humans,” says Ron Pinhasi, an evolutionary anthropologist at the University of Vienna who was not involved with the work.

The soil samples also yielded DNA from many species of animals. About 170,000 years ago, the climate went from warmer to colder, and Neanderthals moved in, so did different species of hyenas and bears.

It’s the combination of genomic data from both the fossils and the soil samples that really makes the new work stand out, Pinhasi says. “It’s a super promising direction [for future work].” Douka agrees, and says the new study should help ancient soil DNA become “a mainstream archaeological tool.”

She is already amazed at the progress that it, combined with other studies, has made possible. “Let’s not forget that as recently as in 2010 we had absolutely no evidence that Denisovans existed, and that these various hominins ever met, let alone that they interbred repeatedly and co-existed for millennia,” she wrote in an email.