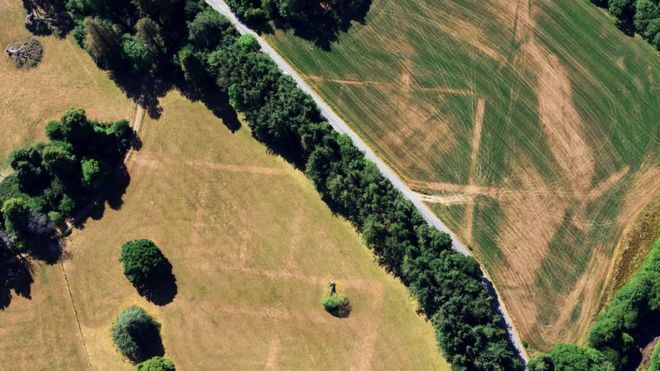 The draught in Wales led in 2018 to the discovery of old Roman fortresses, roads, and military cantonments in a village in the United Kingdom. The aerial view of the area revealed 200 such places which suggested the ruins of ancient Roman times could be made possible.

“Britannia,” a researcher from the Royal Commission for Ancient and Historical Monuments in Wales, quoted a science magazine and reported that the Roman legions had entered the rural areas of Wales.

Experts also revealed the ruins of the marching camps at Monmouthshire in the vicinity of Caerwent.

“The camps are truly interesting, used to stay overnight Romans had built on the maneuvers in hostile territory.” Researcher Toby Driver said the discoveries “turn on the heads everything we know about the Romans.”

The aerial investigator for the Royal Commission on Ancient and Historical Monuments of Wales said the new research published in the journal Britannia showed the “Roman military machine coming to rural Wales”.

In Monmouthshire, the researchers have identified a new “marching camp” at a site near Caerwent.

“The marching camps are really, really interesting. They are the temporary overnight stops that the Romans build on manoeuvres in hostile territory.”

The site would have provided defensive positions, camping and kitchens for bread ovens.

“This is when Wales is still a very dangerous place to be for the troops, they are still under attack,” added Dr Driver. The entire area heading into south-east Wales through Usk to Caerleon would have been peppered with similar sites, believe the experts, as the Roman armies fought a 20-year battle to crush resistance amongst Celtic tribes, notably the Silures in southern Wales.

But these sites were “ploughed away pretty quickly” when the fighting was over.

“This is only the third marching camp in south-east Wales that we have discovered. We know there should be more of these around to show how the army was moving in Wales – it shows the big routes they are pushing through to control different parts of Wales,” added Dr Driver.

With conquest came reinforcements, and that meant forts. The aerial photographs confirmed the locations of at least three new fort sites, including the first found in the Vale of Gwent at Carrow Hill, west of the Roman town of Caerwent and the Roman legionary fortress at Caerleon.

The crop images show it had inner and outer defensive structure and a “killing zone” in between, perfectly ranged for a javelin throw.

The photographs found a long suspected fort site at Aberllynfi near Hay-on-Wye is indeed Roman, even though part of it has long since been built over by housing.

While further investigations at Pen y Gaer in Powys, near Tretower and Crickhowell, have revealed new detailed structures previously undiscovered – despite digs and surveys on the ground. The researchers, who included Roman experts Jeffrey Davies and Barry Burnham, have also been able to identify details of new villas – including at St Arvans, north of Chepstow in Monmouthshire.

The location had previously been considered a temple site, after part of a bronze statue of Mars was unearthed. But the heatwave images make it clear this was a Roman villa of some note, with its room structure clearly visible. Perhaps the most startling discoveries have been pieces of unknown Roman road.

One shows how the Roman armies pushed their way south from Carmarthen to Kidwelly, reinforcing speculation the town was home to a Roman fort – even if it may now be covered by Kidwelly Castle.

“It’s the scale of the control of Wales which is exciting to see,” said Dr Driver.

After the driest May on record, Dr Driver hopes he will be able to get back in the air as soon as coronavirus lockdown measures allow, to see if he and his teams can find more pieces of the Roman puzzle in Wales.

“Although we had loads come out in 2018, we’ve got this big gaps in Roman Wales that we know should have military installations – but you’ve got to get out in dry weather to find them.”