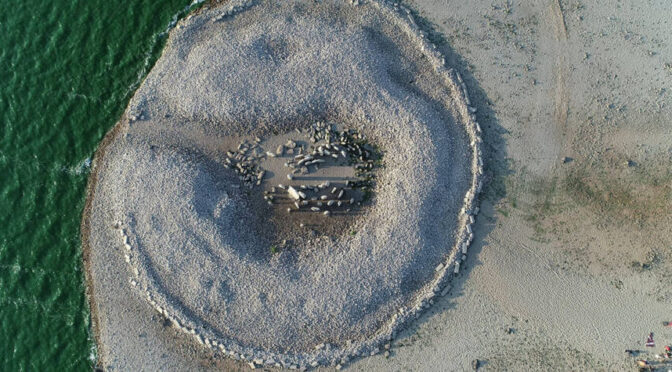 After 50 years of immersion on the bottom of a basin, in Spain, a 5,000-year-old monument emerged.

There are 144 granite blocks on the megalithic site, which are over 6 feet high, known as ‘ Spanish Stonehenge. ‘ Its similarity to the UNESCO World Heritage site in Wiltshire is striking, but the Iberian version is made of smaller rocks.

The Spanish General ordered the construction of a hydroelectric dam at Peraleda de la Mata, near Cáceres in Extremadura, which was supposed to be condemned to the history books of the 1960s.

However, a severe and prolonged drought has seen the structure emerge as the last drops of water vanished from the barren basin. Western Spain is being ravaged by a year-long drought and the Bronze Age structure, thought to be an ancient temple, can now be seen.

Hugo Obermaier, a German priest and amateur archaeologist, first found the site in 1925.

Due to the unfortunate decision-making of General Franco who opted to consign the site to obscurity when he commissioned a valley bordering the Tagus river to be flooded.

But before its rediscovery and subsequent demise, it is thought the stones would have centered around a central chamber for sun worship.

It is believed the Celts living in Iberia 4,000 years ago may have built the structure.

‘The stones have been brought from about five kilometers away to form this temple, which we think was used to worship the sun,’ Ángel Castaño, president of the Peraleda Cultural Association, told the Times.

‘In that way, it has similarities to Stonehenge but is obviously smaller.

‘People here had heard about them but had never seen them. We want the authorities to move these stones to the banks of the reservoir and to use them as a tourist attraction, as few people come to this area.’

Stonehenge’s enormous rocks are up to 30 feet in length, dwarfing the six-foot-tall single monoliths uncovered in Spain. There are more stones at the Spanish site, 1144 compared to 93 in Wiltshire.

Long-term plans for the preservation of the site are yet to be laid out, but Mr. Castaño met officials from the regional government yesterday to discuss the matter. If action is not taken now, he said, it could be many years before they are seen again.

A prolonged submersion could also be catastrophic for the stones, which are made of granite, a porous material prone to erosion, The monoliths are already showing significant signs of wear, he said, and if they are not saved now, it may be too late.

Radiocarbon dating of the rocks found they range in age from around 4,000 to 5,000 years old and this ties them curiously to the history of Stonehenge.  Neolithic people, often prone to building monolithic structures, emerged throughout time across Europe.

It is widely accepted Stonehenge’s bluestones were quarried from Priesli Hills in Wales and moved to the current location, but how the idea for Stonehenge arrived on British shores remains a mystery.

Various pieces of recent research have looked at what likely led to this, and a scientific paper published in February put forward the idea that the knowledge and expertise to create such monuments was spread around Europe by sailors.

The authors from the University of Gothenburg said the practice of erecting enormous stone structures began in France 6,500 years ago and then made its way around Europe as people migrated.

Further research into the Spanish Stonehenge could allow for a more detailed picture to emerge of the practice’s popularity in different areas at different times. Currently, inhabitants of Anatolia, what is now Turkey, are thought to have moved to Iberia and settled before eventually heading north and entering the British Isles.